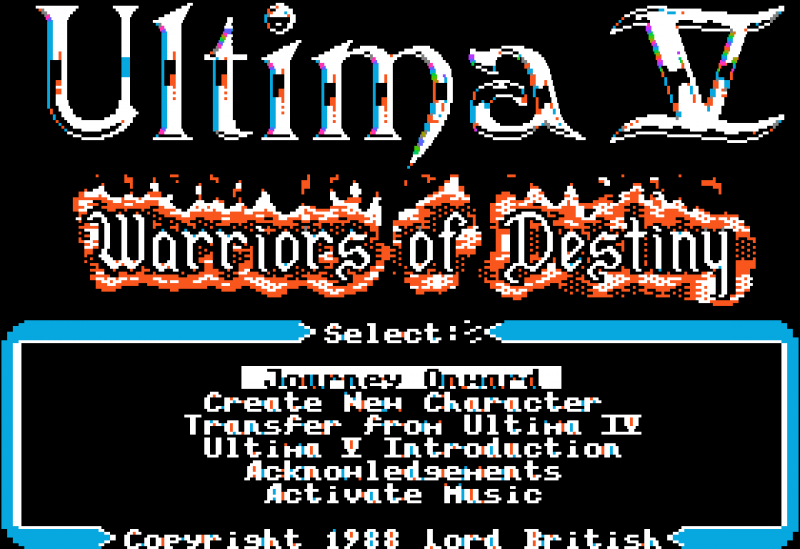 Ultima V is perhaps the pinnacle of gaming on the Apple ][ computer system. While I thought that Nox Archaist built on the basic mechanisms and presentation in a way that made this type of old school RPG more accessible to modern tastes (and is still a great game on top of that), Warriors of Destiny is unmatched in terms of scope, storytelling and core game play mechanics. Although the sprites are simple, the world of Britannia is filled with detail. This ranges from interactive world objects such as clocks, stockades, and harpsichords, to rich and evocative dialogue interactions. And even a set piece or two:

It has taken me quite some time to finish this game. I bought it on release some thirty-plus years ago and played it on my IIgs for hours upon hours. I never was able to beat the game though. I think I got about two-thirds the way through, having defeated the Shadowlords and only having that final quest to rescue Lord British remaining. Simple, just descend through an eight-level dungeon, make your way through a uncharted section of the underworld, avoid lava, make sure you have the correct item to pass the magical barrier, have that final word of power ready, descend through another eight levels of the game’s final dungeon, and did you remember to pick up that secret object which allows you to save Lord British because if not, too bad.

Did I mention that this game is really hard? My teenaged self really had no idea how to play role-playing games with any skill. Level grinding and balancing a party were not concepts I understood very well. On top of these basic skills. The early Ultima games were brutal in the early phases of the game. Players needed to try not being killed by low-level monsters all while having to maintain a stock of food, spells, reagents, gold, torches, and gems. One wrong step or random trap and you are poisoned with only a couple dozen turns to find a cure before your HP dwindled to zero. You really had to have patience and take the time to build up your characters before attempting to finish the main quests.

This is rather difficult to do on actual hardware. I could have loaded the disk images on to my CFFA3000 and played on my IIgs but there is a ton of disk swapping in this game. Also, we had a Mockingboard sound card on our Apple ][+ but the card version we had was not compatible with the IIgs. We got rid of that card with the original Apple ][+. This always sucked because the music is one of the best parts of the Apple version. The Dos version (which I own via GOG.com) looks tons better but is missing these musical cues too.

Playing the game in AppleWin made everything much better. I had all the music, could speed up the game during my many grinding sessions, and I had the ability to save the state of the emulator at any time. I guess that last item is almost cheating as I often would save a state before resting and reload it if I got ambushed at night. But that is not as bad as the extent of my cheating back when I originally played the game and would sector edit my stats. Believe me, I was tempted to edit my food levels during this play-through but resisted (Track $03 Sector $04, bytes #80 & #81). Also, there’s a point after delving into your first major dungeon when gold and food are thankfully no longer an issue. I tried importing my original character disks into my PC, but the disks were corrupted after years sitting in my basement. I just started the game from scratch. I was in this for the long haul.

The core of the Ultima games has always been its innovative dialogue system. By using a simple text parser and giving the player control of the exact topic being discussed you are able to return to characters you met previously and glean new information on new topics. These clues emerge as chains of conversations between many NPCs, forcing you to pay attention and immerse yourself in the story. This system would be perfected in Ultima VI a few years later. As with that game, detailed note taking is essential.

Characters and story are icing on the cake but Ultima V was the last of the games in the series to remain true to the combat-oriented design of the original. The tactical turn-based battles work very well considering how simple they are. Magic is useful but not the be all and end all as it is in the Infinity Engine games. A dummy like me can just chop and slice my way through fights. The skirmishes really take shape when you start venturing into the dungeons. We still have a wonderful first-person shift in the dungeons that is punctuated by various custom chambers which switch back to tile-based view. The rooms are filled with treasure and secret switches that made dungeon delving much more fun than I remembered.

My final assessment of the game is that it ranks up there as one of the best installments in the series. It surely is the best one on the Apple ][ series and would recommend to anyone wanting to play a game on that system to start here. The brutal difficulty and old-school quirks keep me from giving it a 10, but it’s well-worth the effort. And now here are some cool screenshots: