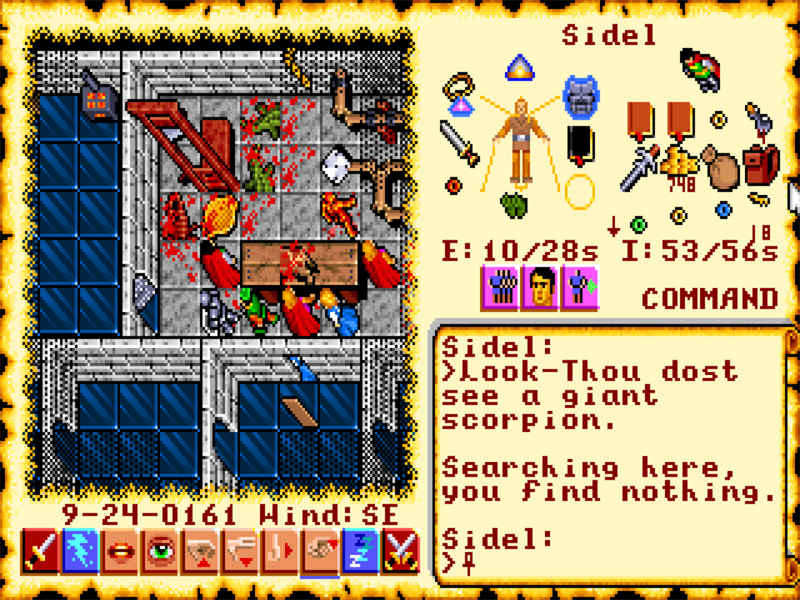 With the completion of VI, I’m getting close to having played all the games in the Ultima series. I own boxed copies of the Apple ][ versions of III–V, but when it came to VI, Origin switched to MS-DOS. In 1990 I was starting college, I didn’t own a computer, let alone a PC, and, as the years passed, history became legend, legend became myth, and for two-and-a-half thousand years, the Ultima series passed out of all knowledge… or something like that.

In the late 90s I upgraded from an Apple IIgs to a Windows 95 PC and was reintroduced to the series via a soundcard bundled version of Ultima VIII: Pagan. That game was mediocre at best and it didn’t finish it until years later—after having played through a CD-ROM Classics version of Ultima VII. VII was a pain to get running on a Windows machine, but it was worth it. It truly is the precursor to modern, open-world RPGs like Skyrim in both its scope and richness of detail.

The False Prophet almost achieves the level of refinement that Ultima VII boasts. It’s not quite there yet, retaining a bit of the Apple ][ era feel. Maybe that’s why I think I liked this a bit more than VII. It doesn’t try to hide the fact that it’s a game. The interface takes up half the screen, there are a dozen or so unique commands (like a LucasArts point and click adventure), and there still are actual RPG elements like leveling-up and turn-based combat.

Graphically, it has that weird, tilted perspective that was in VII, but the scale is small and more tile-ish. Some of the creatures, like rats and bunnies, are depicted with an amazing economy of pixels. Despite the scale, there is a tremendous amount of stuff in the world with which to interact. Many of the puzzles involve pushing, pulling and revealing secrets.

Like previous games in the series, it’s possible to get to secrets if you know where they are in advance. A speed-runner could probably race through the game in no time. But you’ll want to take your time interacting with the NPCs.

Conversations are at the core of Ultima’s game-play. The text-parser driven dialogue is something sadly missing from most games today. It forces you to pay attention to dialogue. Lazy gamers are even given highlighted topics which to type in so you are never stuck hunting for words in normal conversations. However, since you are not given a full multiple choice list, options can be hidden from the player only to be discovered by focusing and taking good notes.

I found the best way to play this game was to reconfigure the DOSBox settings to display the game in a large window that almost fills the entire screen output=opengl, windowresolution=1360x1020, also autolock=false so you can move your mouse out of the window). Then I used the remaining space on screen to have text file open in an editor. I noted every character I met, their job, and where they were located. If they mentioned anything that seemed remotely important, I would type it in to my notes. Having a searchable file really beats hand-written scribblings and makes puzzle solving a bit more manageable.

Still, this game is old school. Don’t be ashamed to use the included clue book for help and maps. It is probably possible to put the game into an unwinnable state if you lose and important object. You only are allowed one save, so be careful. The game bugged out on me literally at the final puzzle. To win the game you need a few special objects. I was missing one of those objects so went off to get it, leaving the others in the final room. When I returned to the final room, one of the necessary items had vanished. At that moment, I was ready to go into a serious, pon farr-level nerd-rage. Fortunately, there is a debug mode still in the game and I was able to regenerate the glitched object. All was well and I had saved Britannia once again.