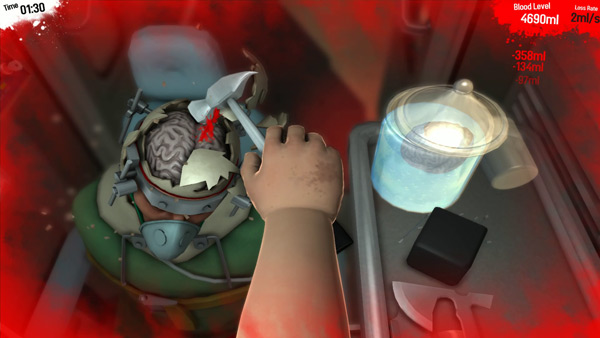 I had hoped that when they adapted the Web version of Surgeon Simulator into a full game they would have added a funny story line ála Trauma Center. Instead they have just expanded the original game by adding two more procedures and a couple more environments. It’s still much the same game: purposely horrible game controls, inappropriate tools for the job, painfully hilarious physics interactions and general surgical mayhem.

Most of the fun of the game comes from unintentionally butchering your patient. Tools are flying everywhere and your calculator watch will inevitably fall off into the patient’s chest. All the while you have to watch that blood level. Get a little too aggressive with your hacksaw and you will have a flatliner on your table. The challenge is mastering ridiculous the 1-button-per-finger hand controls. Back in the Atari 2600 days, mastering awkward controls was actually part of the game design too but, thankfully, that has faded from game design. Who would have thought such a bygone, horrible design choice could be revived in a way that is actually fun. Maybe it’s not worth full price, but Surgeon Simulator 2013 is worth trying out a few laughs.