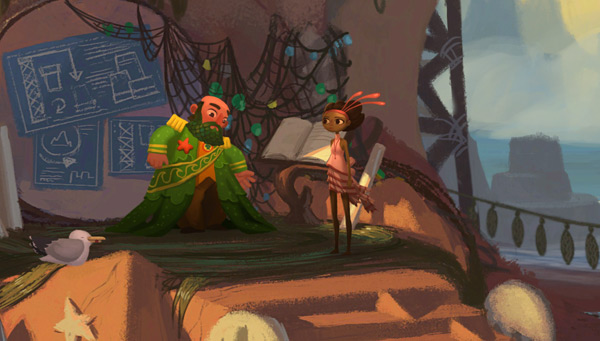 Like a gazillion other people, Doublefine Adventure was the first Kickstarter that I bought into. It was scheduled to come out two years ago. During the delay I started playing many other more modern adventure games to get me in the groove again (see here, here, here, here, here, here and here). It’s finally out (at least the first half of the game is out), but how does it stack up against other adventures?

Well the game looks fantastic. The hand-painted art style and character design is reminiscent of other Doublefine games like Costume Quest and Psychonauts. Doublefine has a tendency to make games with a great art direction but lackluster game-play. Fortunately, the point-and-click adventure game mechanics are pretty well established and Broken Age doesn’t stray too far from the tried and true formula.

If I have any complaints, it would be that the game is too simple. In many cases, just clicking down every path of a dialogue tree will get you an item you need. Most of the actual puzzles are fairly logical and involve using an object how you would expect to use it. The challenge is just to collect all the needed objects. I guess being too easy is not a bad thing. It’s better than having to rely on a walkthrough. But I would have preferred a little more challenge and perhaps an in-game hint system like Telltale uses in their games.

In the end, the low difficulty can be forgiven since the story is so well done. The two parallel narratives work well against each other. Each is filled with unique characters, strange environments and a touch of sly humor. I don’t find the writing to be the laugh fest that many reviewers are claiming, but it’s cute and clever and never dull. I hope this does well beyond the just the Kickstarter backers. We need more adventure games.

Ok, so here we are a year-and-a-half later and Act II has finally been released. If I were to rate the game as a whole I would probably drop it to a 7 or 8. The second half of the game ups the difficulty of the puzzles by a notch, but loses much of what made the first part’s story so interesting.

There were a few horrible adventure game sins committed where the answer to a puzzle relied on information that the current character couldn’t possibly ever know. And, unfortunately, that faux pas was about as close to inter-connectivity we got between the two character’s worlds.

I didn’t dislike the second act, but much of the magic was lost. Oh well, this Kickstarter got me playing all sorts of other adventure games like the (far-superior) Blackwell series and Telltale games.