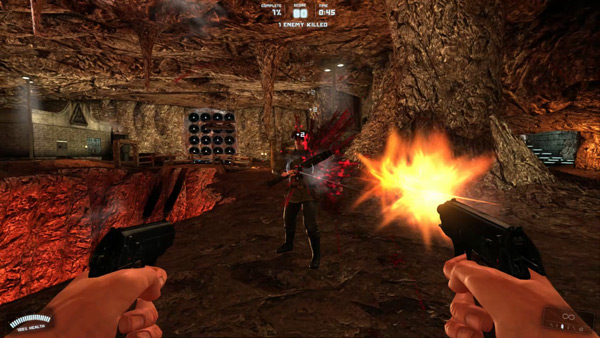 I’m on a bit of a tear here finishing off games. I guess after that last Winter Steam sale I had about six different games going concurrently. Anyways, I just finished the Rise of the Triad remake and it was pretty much what I expected: a technological upgrade of a mid-Nineties FPS shooter. The developers were pretty clear that outside of the better graphics, sound and controls there were not going to be any big game play changes.

This is a pure run-and-gun shooter. There is no plot, the voice acting is crap and the art direction is pretty incoherent. Like the original (seen below)…

…the joy comes from the powerful weapons and crazy power-ups. “God Mode” from the original remains the best power-up from any game, ever (grow to eight feet tall and become “moaning with power” as you launch cosmic death orbs!).

As fun as this reboot is, it is still a bit behind the times. There are glitches galore, the AI is mediocre at best and the boss battles just suck. But it’s short and cheap and there are lots of fun little touches like the mission briefings and insulting death taunts.