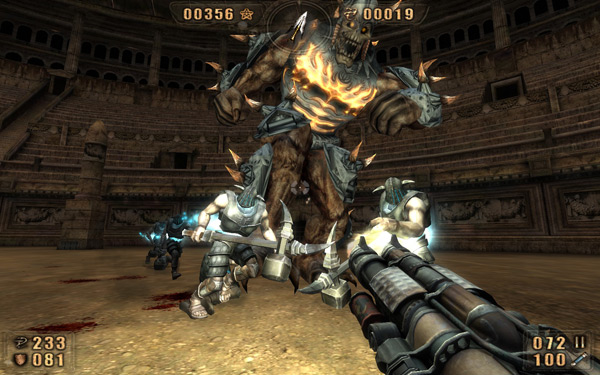 Painkiller is a first generation FPS that’s about a dozen years too late. Unlike most modern shooters, your goal is singular: shoot everything. Story, characters, game play variety and puzzle-solving are all out the window. That said, I think there still is a place for games like this, but I found Painkiller lacking in a couple ways.

First, although the game has a sort of achievement system for getting power-ups, completing the level tasks just wasn’t fun. Who wants to search around a poorly designed game map looking for barrels. Rather than rewarding meaningless exploration or OCD item hunting, there needed to be a system that rewards risky game play (big points for melee attacks) or high skill shooting (headshots). The core of the game is shooting, don’t make us obsess over things that have nothing to do with our modus operandi. Secondly, if you aren’t going to give as a story, at least crank up the comedy (Serious Sam) or horror (Doom 3) that would motivate us to progress through the game just to hear that next witty jibe. The Black Edition includes the expansion Battle Out of Hell which I found to be slightly more challenging and well thought out that the original.