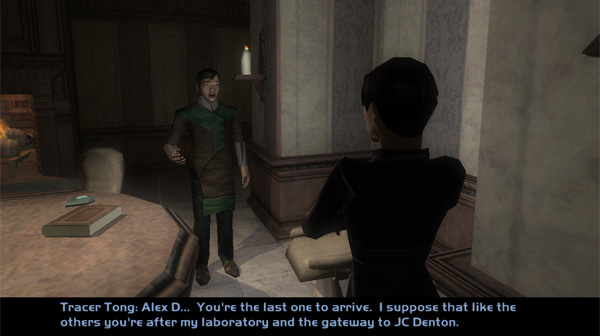 This is a sequel I have been meaning to play through for a few years now. The original Deus Ex was very well executed, although I would be hesitant to heap as much praise on it as seems to receive these days. Its big hook was the open game play it offered: sneak, negotiate or kill… it was up to you. Invisible War has some of those choices, but it is dumbed down to the point where you might as well just kill everybody you meet because there is no advantage (or fun) to choosing a different path.

The game also lacks the precise allocation of RPG stat points that you got in Deus Ex. Instead, you get to fill a few slots with “biomods.” These are essentially generic power-ups. I never felt like I was creating a unique character. By the end of the game I found myself just ignoring any new biomod canisters I came across because they didn’t really do that much.

What Invisible War does do right is maintain the feeling that every object in the world can be manipulated. I loved just randomly throwing chairs at bystanders and watching the rag doll physics work. The graphics are also much improved and hold up quite well. The story is just as convoluted as the original, but, for what its worth, we do get to see some of the main characters reprise their roles (sans the amateurish IT department voice acting).