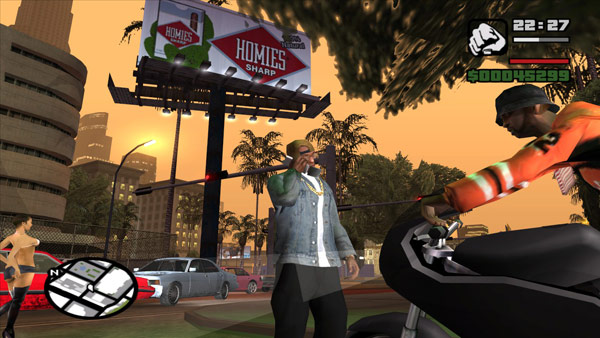 Coming off of FarCry 3, I really wasn’t sure I wanted to commit myself to another massive open-world game, but San Andreas was there in my bin of unplayed games calling to me. The GTA formula, like war, never changes: huge open world, lots of driving, violent gangster themes and general mayhem. I really wish the stories were more compelling, but they tend to get lost in the huge scope of the game. Personally, I have no nostalgia or interest in Southern California gangsta culture and music. In light of the never-ending murder in Chicago, it’s a hard sub-culture to glamorize without feeling icky. I was able to set that aside and just enjoy exploring the map and all it’s diversity.

The game technology is a slight improvement over Vice City, but it still seems empty blocky by contemporary standards. The cars still drive all floaty and weird the same way they did in GTA IV. Planes played a much bigger role and were difficult to get the hang of initially. Mouse controls don’t really work for flying but the joypad sticks for everything else so I just kept it on my lap for when I was flying. I realize I don’t have much positive to say here, but, really, I liked the game. Now that I have finished I will probably go back in an explore and be a bit more crazy for a while before moving on.