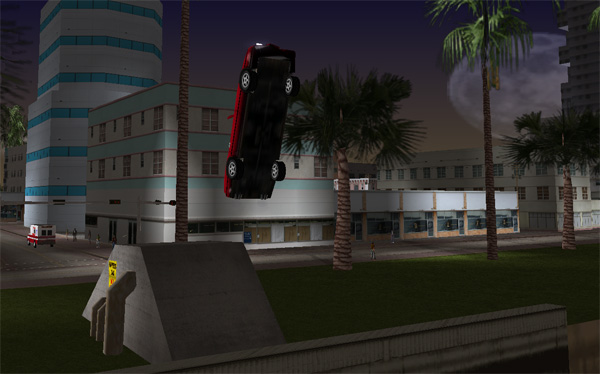 GTA: Chinatown Wars on the DS was my first Grand Theft Auto game and it remains one of the best games on that platform. When Vice City went on sale on Steam I decided I had to try out a proper 3-D GTA game on the PC.

Reviewers always seem to note the violence and mature themes as the selling point of this franchise, but really what makes it so great is that it fulfills a video gaming fantasy that I imagine most Atari aged gamers had as kids: being able to get off the race course and just drive wherever you wanted in a game. The closest I came to this as a kid was driving off the road in Intellivision’s Auto Racing looking for shortcuts. That didn’t really satisfy the way GTA does. Vice City lets you go just about anywhere your road rage fantasies want to take you. The game incentivizes crazy driving via the strategic placement of ramps throughout the city and awarding bonuses for extreme stunts. Add to this tons of eighties radio hits blasting in the background and you have enough for a fun game.

But the game isn’t just about driving. There is a simple story which evolves as you complete a series of missions. The plot is not great, but it was enough to keep me interested and, even if the story was dumb, there was plenty of variation in the types of challenges (from delivering pizzas to flying a seaplane) to make me want to complete everything. However, when the game makes you get away from driving and into combat it gets a bit wonky. The controls are pretty terrible on the PC and half the time I found myself failing because of bad hit box detection or some other frustrating glitch. I really, really wished you could just quicksave anywhere in the game.

Technical problems aside, this was a great game and I get what the hype has been about all these years. In fact, I just bought GTA IV on sale this morning and will be back to the mayhem soon!