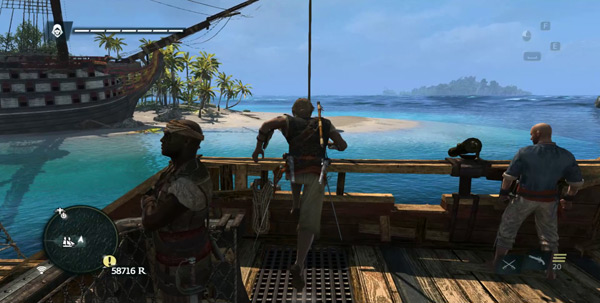 I played the first Assassin’s Creed several years ago and, while I thought it was an okay game, I was never compelled to continue on with the series. It was just too repetitive and item collection driven. The only reason I have AC4 is that it was bundled with my new video card. Black Flag is an absolutely beautiful game and it’s no wonder EVGA bundled it with my GTX660 as a way to showcase that mid-range card’s capabilities. Ever since the original FarCry I have been a sucker for games that are set on tropical islands.

At its core it is mostly the same game as AC1 but the narrative is much more focused. The missions, although similar from one to the next, aren’t the exact same quest over and over. There is actually a story-based point to most of the challenges you face. The mindless item collection is still part of the game, but looking for pirate booty sorta makes thematic sense here. The combat has also been streamlined but is ultimately kind of disappointing after experiencing the pure elegance of Batman: Arkham City’s excellent fighting system. Thankfully, avoiding combat and stealth are a big part of the game.

Oh, did I mention naval battles? Ever since reading all of the Aubrey/Maturin novels I have wanted a naval combat video game. Old Ironsides on the Apple ][, despite its simplicity, actually came close to capturing the feeling of the chase and ship-to-ship dueling. AC4 takes it one step closer by adding the hand-to-hand, yardarm-to-yardarm fighting that would decide the battle in the end. The combat is still very twitchy and too fast to be a true naval combat simulation, but it is really fun.

Like most things in this game, even the naval battles start to become a bit tiresome after a while. My advice to anyone picking up this game would be to stick with the main missions and ignore most of the side quests and collecting. The current-day framing story is a waste of time and should be ignored as well.