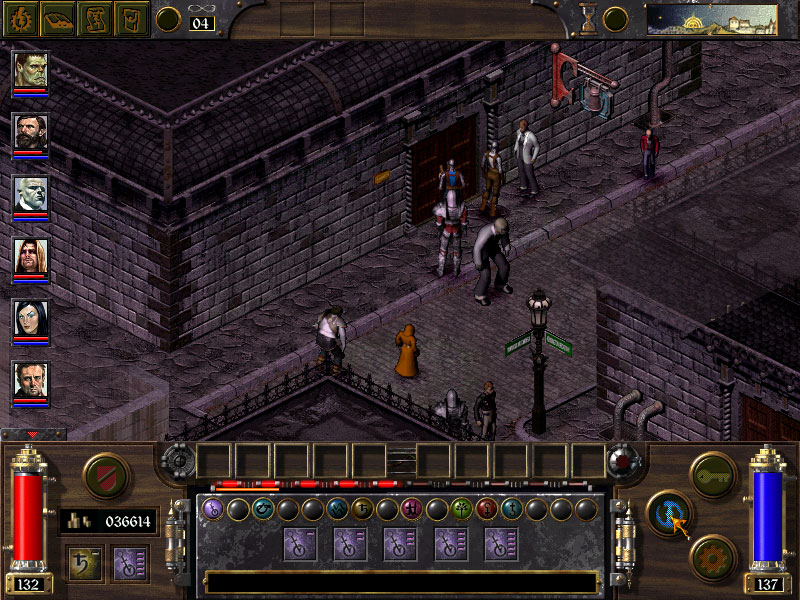 With this game I have finally played all the key 90s RPG classics. I attempted to play a few years ago but because the GOG version of the game ran so poorly in Windows 10, I gave up. This time around I found the Unofficial Arcanum Patch and that made most of the performance issues go away. That is, until the last stretch of the game in which characters began randomly to disappear from my party and saves became corrupted. I managed to complete the game by turning off the high-res patch and saving every few minutes, but, man, was that ever annoying.

The main selling point of Arcanum is its steam punk setting. It’s the technology of the Nineteenth Century mixed with magic and the stereotypical fantasy races. In the end it just feels like another D&D style fantasy game where you have to defeat the evil wizard, etc. I was a magic, sorry magick user so the technology stuff had little impact on my play style. Aside from the opening sequence, in which a blimp is destroyed by planes, and the occasional reference to trains this might as well have been Middle Earth. For a truly steam-punk RPG play the excellent Ultima: Martian Dreams.

The main quest line is okay. It does eventually degenerate into the aforementioned cliché of defeating the evil wizard but there are plenty of little side quests in every region to keep things interesting. Much like Fallout at the end of the game you get a recap of all the good deeds you accomplished, so it pays to offer your help wherever you travel. There are lots characters and lots of possible dialogue interactions, and, because I focused on charisma, I was able to talk my way out of many-a-problem. It could get a bit wordy at times but that can be expected of games of this vintage.

Arcanum uses the same engine as Fallout 1 & 2 but has a janky combat system that’s sort of turn-based and sort of real-time. It works most of the time, but once your characters are leveled high enough it just becomes, “point at the thing and it will die.” Despite its flaws I found the combat to be fun or, at the very least, satisfying.

The main problems with this old-school interface were inventory management (especially dealing with your party members), navigating the zoomed-out map, and moving around on screen with limited visibility. I think Arcanum is still worth playing if you can tolerate its technical flaws and its failure to live up to its setting’s potential.