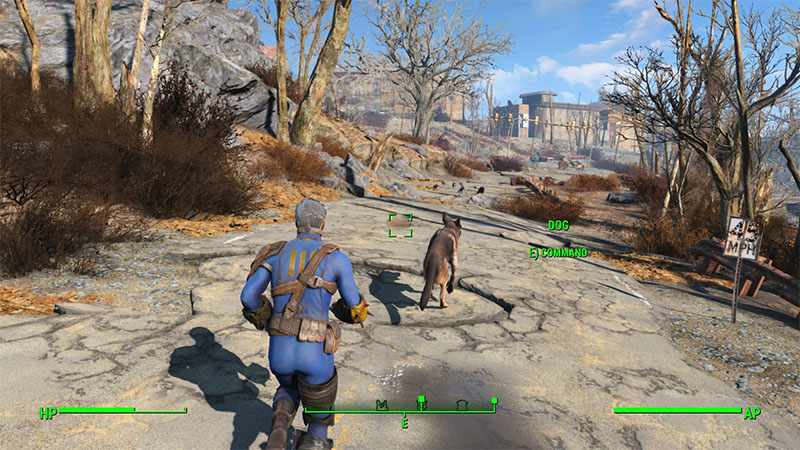 I was quite a bit hesitant to get this game because I had heard that a big part of if was building and maintaining settlements. Along with crafting, this type of management system is one of my least favorite types of game play. The first few missions are all about teaching you to create and build settlements but there soon comes a point when you can ignore that part of the game in get to the really fun part: exploration and combat. Why would I want to maintain a farm when out can explode dudes.

The V.A.T.S. system is no replacement for the turn-based combat of the original Fallout games, but it has its own appeal that melds well with otherwise standard FPS mechanics. I never got tired of the slow-motion replays of the body parts flying everywhere.

The main story is the game’s weakest element. You awake from a cryogenic sleep to discover your infant son has been kidnapped. This plotline ends about halfway through the game and it shifts to working between the various factions of the wasteland. None of them seem particularly evil and yet you are tasked with destroying them by the various other groups. At that point I stopped caring.

The real fun of the game is exploring the massive open world. There’s a little story connected with every location. Sometimes its told explicitly, other times it’s gleaned from the items and messages that have been left behind. Very soon I was ignoring the main quest and just running off in random directions looking for adventure. Before I knew it I has sunk well-over a hundred hours into the game. I even started to enjoy the settlement building as I collected trophies and magazines from around the Commonwealth.

I finally completed the main quest after which the game wisely allows you to keep playing. I still think the original two Fallout games where the best in terms of narrative, but, of the three 3-D games in the series, this one was the most fun to play, and was the best looking (even though it’s still very gray and brown).