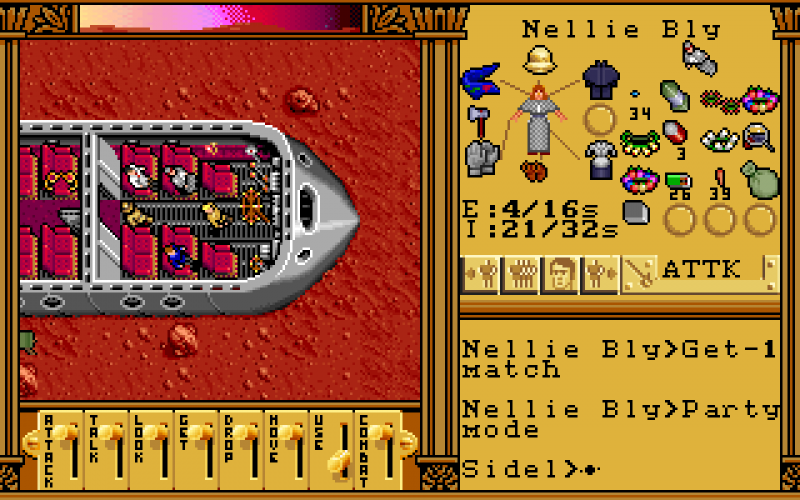 Martian Dreams is built on the same game engine as Ultima VI. Much like that game, it is much less of an RPG and more of an adventure game in which you are wandering through the world, talking to NPCs, and combining objects to solve puzzles. You’re not really building up and customizing your character here. Sure there’s combat and leveling up, but it doesn’t really feel like it matters much.

The most important part of this game is the story and the world it’s built around. Martian Dreams takes place a fictionalized the late nineteenth century setting in which space flight is a reality. Dozens of historical luminaries from the era have all been accidentally sent to Mars and it’s the player’s job to find them all and get them back home. Along the way the real-life talents of the characters will come in to play: George Washington Carver knows botany, Louis Comfort Tiffany know glass making, and Sarah Bernhardt knows, um, stage make-up. The only human villains are the evil monk Rasputin and the anarchist Emma Goldman.

You will soon find out that Mars is not completely devoid of life. The landscape is dotted with the ruins of an ancient race of plant beings. It is all very imaginative and unlike any game that is being produced these days. The game has the feel of a classic Jules Verne novel. I think a modern developer would have pushed to make it as steampunk as possible. Anything to get the cretins cos-playing at some dumb-ass convention.

That isn’t to say that this game couldn’t use some modern updates. There is no way to track your quests other than “good” old-fashioned note taking. As with Ultima VI it pays to play the game in a window and have a text editor open to the side where you write everything down. Every little detail is important. A couple of events won’t trigger unless you type the exact word into a dialogue. If GOG.com was smart, they’d implement an in-game overlay note taking/map making interface for these classic games.

You also have to act like a crazy cat-lady hoarder with every object you pick up. If you lose that weed-sprayer, there’s no way to beat the game. I had a central dumping point for every object I decided to drop. Who knows if you’re going to need martian dirt money or chewing tobacco later on.

I only have a couple of major quibbles. First, the world map is not very interesting. Lots and lots of red dirt and hills. You’ll be doing lots of walking all over that featureless map. Second, combat is not very fun or important to the story. Fights just get in the way when you are trying to run hundreds of miles across the dirt plains. The weapons are all just as good as the kitchen knife you find early on. Guns just weigh you down and the final battle doesn’t even let you take the weapons you’ve collected in to battle. That said, if you are patient, Martian Dreams is a unique and refreshing RPG adventure.