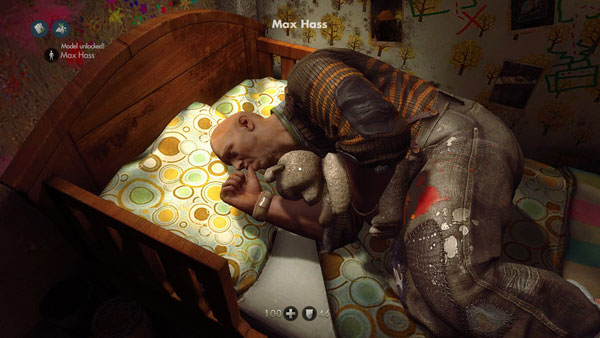 It’s been a little while since I’ve played a current generation FPS, so maybe I just impressed with the slickness of it all, but I enjoyed this one. The New Order, unlike the 90’s Wolfenstein, is very story focused. The premise here is that Blaskowitz got konked on the head, woke up a decade later, and found out the Nazis had won World War II. So, first things first, get a gun, join the resistance and shoot everything that moves.

The action is paced so that you aren’t blasting everything Serious Sam style. There are stealth tactics and lots of hidden extras to be found through exploration. A big part of the game is the new welder gun thingy. You can use it to cut through metal fences, chains and crates. This adds to the exploration but it’s not that impressive as a weapon or new game play mechanic. I usually stuck with the standard machine guns, shotguns and silent strikes. All the weapons can be dual wielded and there are bonuses for pulling off specific types of kills.

As I said before, there is a big emphasis on story here. The situations are pretty ridiculous and over the top. However, there is a seriousness to many of the character interactions that just seemed out of place. This included a couple of embarrassing “love” scenes and a side story about a Jimi Hendrix wannabe who won’t fight because Americans are just as bad as the Nazis or something inane like that. In the very first level you are given a binary choice which doesn’t really affect the story path much, but it does set up Death’s Head as a great villain.