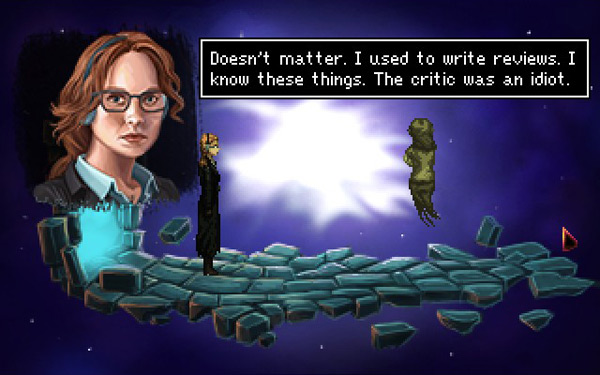 The fifth and final Blackwell game continues in the series’ tradition of thoughtful and interesting adventures that are light on the puzzles and big on character interactions. Technically, the games have come a long way. The graphics are top-notch and the voice acting is much improved. The games still are running on the freeware AGS (Adventure Game Studio) platform, which has its limitations. But, for the most part, these last few games in the series have been on par with the Lucasarts games of old.

Whereas previous games in the series offered small glimpses into actual New York stories and characters, this game focuses more on the fantastic. Most of the series’ lingering questions get answered, although sometimes you have to make sure to pay close attention to all the dialogue to pick up on the details (I have a tendency to get a little overzealous with my clicking). I felt most of the puzzles were fair with the exception of one where for some reason combining coffee and a rag makes you jump farther? Oh, post-spoiler spoiler alert.

The ending is satisfying and let me be the one-billionth reviewer to describe it “bittersweet.” By the climax, my entire family was crowded around the screen wanting to know what was going to happen next. The series has shown to be very entertaining to watch even for my pre-teen daughter (Although, be warned that the commentary contains some salty language’save that until the kids are in bed).

Wadjeteye has proven to be a top-notch developer and, since finishing Blackwell, I went on Gog.com a bought up most of the other games in their catalog. More pointing and clicking to come.