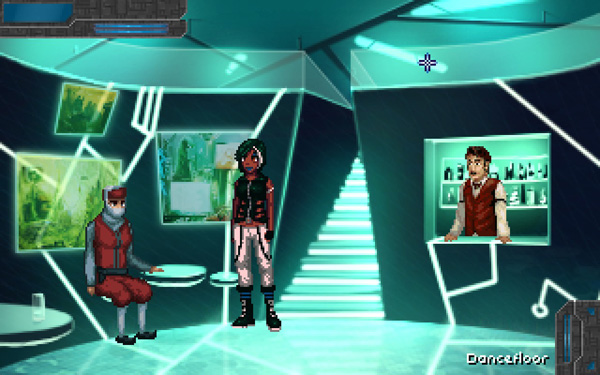 Wadjet has produced another solid point and click adventure game that makes up for its somewhat lackluster predecessor, A Golden Wake. This one is a sci-fi, cyberpunk thriller in which there is a killer on the loose “mindjacking” his victims’ memories.

I never quite understood the appeal of cyberpunk. My experience in the genre is limited mostly to The Matrix movies and a fruitless attempt to play Neuromancer on the Apple IIgs. Thankfully, most of Technobabylon takes place in meat-space with a focus on criminal investigation and dialogue. At various points in the game you control one of three characters: Regis the old-fashion police detective, Max his assistant who uses her cyber-skills to investigate, and Latha the girl who is addicted to “The Trance.” I’m not sure how one could get addicted to standing on empty platforms and hacking food vending machines, but then again I don’t understand let’s play videos either.

As with all the other games from Wadjet Eye, the voice acting is (mostly) professional sounding, the pixelated art is as lovely as ever, the plot moves along at a decent clip, and the puzzles are for the most part fair. As per usual I would only get stuck when I would miss clicking some tiny detail on the screen. The Shivah had a nice feature where you could hold down the mouse button to reveal the clickable hotspots. The AGS system is pushed to the limits here. I really wish they could upgrade the sound and animation. As it is, dialogue can sometimes feel robotic, with no cross-talk and occasional stuttering glitches. These are minor complaints and even these glitches can add a little to the old-school charm of the point and click genre.