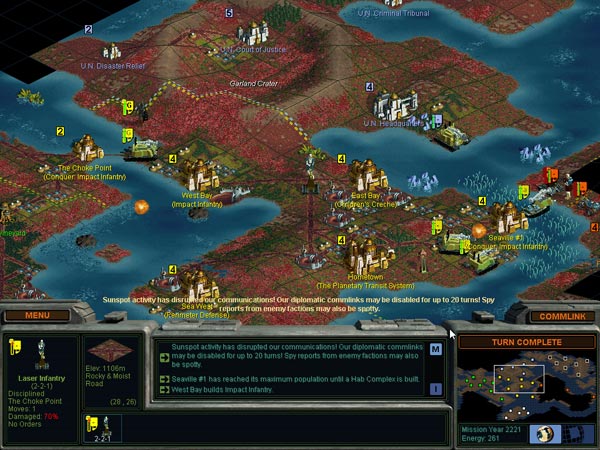 This game was a $5 budget CD when I bought it over a decade ago at CompUSA but I never got around to playing it until now. I have seen it rated on several lists as one of, if not the best strategy game of all time. I can see why it has its reputation. There is a ton of depth in the technology trees and every aspect of the game can be micro-managed to you heart’s delight. The early stages of the game are fun as you explore the planet and set up your first bases. However, gradually the game becomes and overly-complex and tedious exercise in unit management. One might argue that is just the game’s depth showing its hand. Fair enough, but to me it just feels like work.

There’s a point in which every game, no matter your strategy, begins to feel exactly the same. The AI opponents are always saying the same stuff and behaving the same way. There is no real variety in the terrain beyond forest, dirt and fungus. As such there is no need to adapt to a strange alien world or anything like that. The science fiction theme only served to make all the technologies difficult to understand at a glance. Matter Editation, unlike something in an Earth-based civ game, is meaningless to me and tells me nothing of how it could be used to bolster a particular strategy. Not that it matters, because it feels like the game randomly just gives you these tech discoveries.

Again, I can see the appeal. The whole “just one more turn” thing got me for a couple of nights, but lack of variety wore on me. I think I’d be willing to try a more modern Civilization sequel if my mood and the price was right.