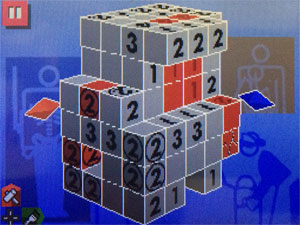 It’s been quite some time since I picked up my Nintendo DS. I have been hacking away at Picross 3D for years now, and I finally decided to buckle down and finish the dang thing before I go completely farsighted in my old age. Turns out, despite my procrastination, this is one of the best casual games on the DS.

The original, 2D Picross was for the SNES and there have since been dozens of themed variations on various platforms including an excellent DS version. At their core these are deduction and logic puzzles with apt comparisons to Sudoku. You are given a grid with numbers running down two sides. The numbers are clues as to the amount of squares you should fill in in each row and column. A number 10 on a 10 x 10 grid is easy: fill in all 10 squares in that row. It starts to get tricky when you are given multiple numbers with lower values. That’s when your brain starts to hurt as you figure out every possible combination of squares that might get filled in and make the ones you know for sure are filled no matter the arrangement.

In Picross 3D, one would think that the added third-dimension would make your head explode, but actually the puzzles are less difficult. The mechanics are a little different. You are now removing blocks based on the numbers and you can only have a single number per row. You know there are multiple sets of blocks in a row if that number is circled or boxed. Solving the puzzles is a matter of meticulously slicing through the object and working on each layer one at a time. It’s very zen and, for the most part, offers just enough challenge so that I was never frustrated but always having to think. It’s not until the hard levels 9 and 10 that things start to get real difficult. Even still, the difficulty there is simply completing the puzzle within the time limit.

As you break through the blocks a 3D shape starts to emerge. This is the closest to chiseling a sculpture that you will ever experience in a video game (well, not including Minecraft). Successfully completing a shape triggers a short, humorous animation and puts the object into a category like “Fun in the Sun” or “Ever Stronger.” If I had one complaint it’s that, having finished the game with 100% perfect ratings, there wasn’t much fanfare and game’s end. I need mindless digital rewards for my time-wasting efforts!