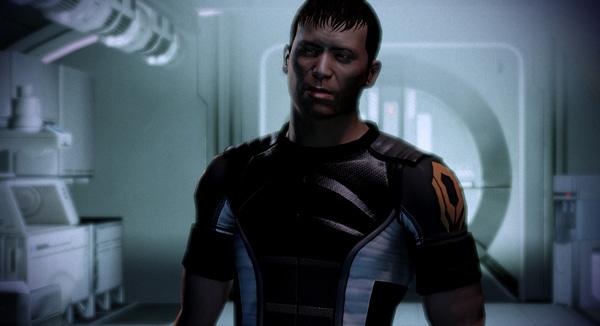 Mass Effect had a really interesting storyline and I was pretty excited to delve further into the universe of Shepard and his tight-clothed comrades. The game starts off with an exciting cinematic which fulfilled goal number one of any RPG sequel: strip the player of all their powers and loot so they can start from square one again. Well, all was not completely lost. I imported my character from the first game so it remembered a few of the major decisions I had made which, for all the hype, seemed to have very little significant bearing on most of Mass Effect 2.

Game play remains mostly the same. Things seem to be a bit easier this time around and the hideous inventory system has been ditched altogether and replaced with… nothing. So, inventory management is gone and now you can just blindly click through and upgrade everything without having to put any thought into your decisions. Okay, fine. I’ve said I’m a lazy gamer in the past, but this seems to defeat the role playing aspect of the experience. The new-found focus seems to make this more of a twitch-free shooter with only hints of role playing in the mix.

The majority of the game’s decisions are made in your dialogue choices. Choosing wisely gains you the benefit of avoiding conflict later on, and can help shape the loyalty of your crew. This time around I was more careful to build relationships with my crew which help me care about them more during the character killing climax of the game. I also spent more time mining resources for upgrade. This was the thoroughly boring process of mousing over the surfaces of dozens of planets and waiting for beeps to get faster. Couldn’t they have made a mini-game out of the process? Even a tertris clone would have improved this.

Fortunately, the story keeps things interesting and makes much of the grinding worthwhile. Each character is given some back story and you actually care about them all. The main plot is rather simple and lacks the grand mystery of the first game but there are plenty of side quests and lots of character development to make it seem deeper than it really was. In the end I like Mass Effect 2 and ME3 may actually be a day of release purchase for me!