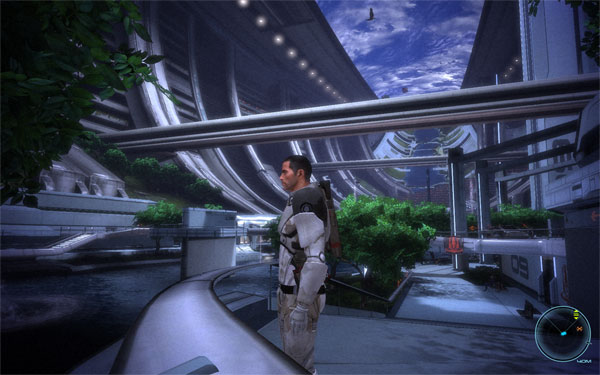 Mass Effect is another BioWare RPG that I picked up on Steam for five bucks during their holiday sale (along with Jade Empire). This is a fantastic looking game. The Citadel (screen shot above) is an  absolutely spectactular environment in which to roam around. This is also one of the first RPGs I have played in which every line of dialogue is voiced’a big help for me and my poor reading skills and short attention span.

The story and the rich universe in which it takes place is top-notch (as far as video games go). The game does a good job in pointing the player in the right direction so I rarely felt like I was lost or didn’t know what to be doing. This means the game can be a bit linear at times, but, as a lazy gamer, I don’t mind that at all.

I don’t think I ever quite got the combat system. I never really felt like my tweaks to the characters really did anything better than just ignoring all the complexity and just shooting everything in sight. My only major complaint with Mass Effect is the horrible inventory management system in which you are forced to trash items you find if your inventory is full. This just doesn’t make any sense. Otherwise, a terrific game and I can’t wait until Mass Effect 2 goes on sale for five dollars.