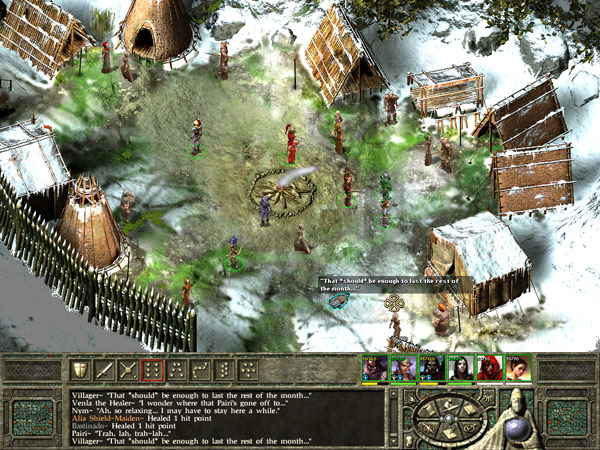 The Icewind Dale series is built on the same game system as the Baldur’s Gate games. Unlike Baldur’s Gate these games are focused more on the fighting and less on the story. As far as I’m concerned that’s a good thing. These old Infinity Engine games are just filled with pages and pages of boring fantasy text. It’s hard to get a sense of character and mood when every NPC has a ridiculous apostrophe-laden name like “Yxbudur’zmutkimdu.” Just point me towards a horde of goblins and let me click them to death. Icewind Dale II is very good at just keeping the monsters coming and follows a very linear progression from area to area. Not until the later chapters do you start to get bogged down with quests requiring putting specific items in specific containers to solve puzzles. The shift of pace was a little jarring and took me a while and a few jumps to a walk-through to get past some areas. I prefer the sword as a puzzle solving tool.

Many of my old complaints about the D & D system still apply here. There’s too many numbers thrown at the player and it’s difficult to know which weapons are more powerful than others. The magic system is immense and it was just too much work to figure out which spells were best against which enemies. C’mon devs, us gamers are lazy! Give us a tutorial mission or two for each class. All that said and in spite of my ignorance of the subtleties of the rules, the combat is fun and satisfying. I hope recent Kickstarter projects attempting to modernize this game system are sucessful.