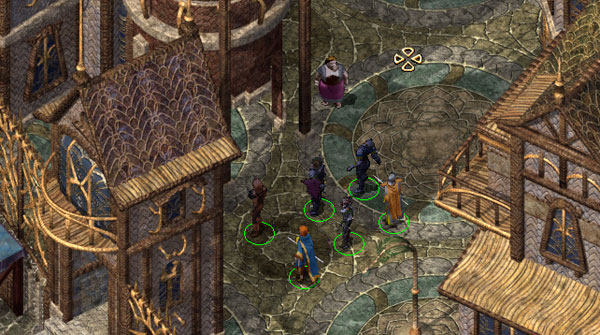 I have had this game sitting on my video game to-do list for a long, long time. This is regarded as one of the best cRPG games ever. It is perhaps deserving of that praise simply for sheer imensity of its scale and attention to detail. Unfortunately, like other older RPGs, the game makes no concessions towards more casual players. There are a gazillion magic spells with which to become familiar. Gear and weapons are identified by numerical stats and dice roll probabilties rather than simply saying, “Powerful sword of lightning damage” or something. I must have looked up what THAC0 meant half a dozen times and I still don’t quite get it. At times the game is just plain unfair, like when you walk through an unmarked door only to die instantly from the attacks of magical creature on the other side. It’s like dying until you chance upon a strategy is part of the intended game mechanics. Like the first Baldur’s Gate I found myself having to cheat my way through 2 or 3 of the battles near the end of the game. I may have been able to win those fights (I doubt it), but after 40+ hours of hacking away at this game, I simply wanted it to be over.

During the majority of the first half of the game, when I wasn’t being killed every two minutes, it was really enjoyable and addicting. My OCD tendencies had plenty of ways to be satisfied by the many, many side quests and stories. Combat actually requires real tactical thinking (which is probably I was getting killed all the time), which is an element sadly missing from most modern RPGs and every Japanese console RPG since the dawn of time. I think it’s time for another game in this style but modernize it so you don’t need a degree in advanced nerditude just to understand the manual.