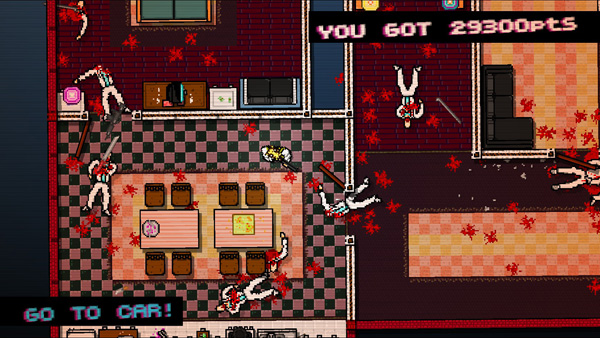 Hotline Miami is an ultraviolent, fast-paced arcade-style game that owes a lot to Smash T.V. and Berzerk. Although it uses both analog sticks, I wouldn’t quite call it a twin stick shooter since you are using the shoulder buttons to fire and swing weapons. These controls are not easy to get used to, but eventually I got a handle on them. Yet even near the end I was still dying because I would accidentally throw my weapon rather than target an enemy.

The game is pretty spastic and unforgiving. You are rewarded for speed and recklessness but a lot of times you will get killed without warning by a thug who is out of your range of view. Success comes from memorization of the levels and repetition. You need to plan your attack route using a mix of stealthy melee kills and well-placed (but loud) gun shots.

By the end of a stage the screen is filled with bloody puddles of pixelated henchmen. The violence can seem be a bit unnerving and excessive at first, but the lo-res graphics, Scarface themes and dreamy tone keep it from becoming too icky like Postal was.