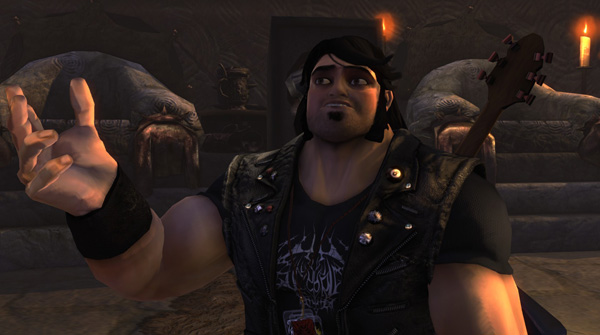 I really wanted to like Brütal Legend. but once again Doublefine has created a game that is a triumph of style over substance. The story concept is there: Jack Black as a concert roadie who saves heavy metal music from obsolescence through the power of rock. There are so many great ways that this tale could have been told. How about a parable about commercial, corporate entities are watering down great music? Or how with so many entertainment choices, kids just don’t care about being in bands any more? Nope. Instead we are taken to what amounts to your standard D & D fantasy world with a sheen of Eighties metal album cover art direction laid on top. If not for the fact that your magic wand is actually a guitar, the game-play doesn’t build on the music themes that are set up in the premise.

I would be able to look past the story direction and just play in a fantasy world where I could join Lemmy, Ozzy and Rob Halford in battle, but the game mechanics range from dull to infuriatingly not fun. In the case of the former we have standard button mashing hack and slash segments, and as for the latter there are the much bemoaned real-time strategy battles. Those RTS portions are terrible. The controls are awkward and there’s no minimap to help you command troops. You can’t tell enemies from friends so, when you join in the fighting, you are just randomly swinging at everything. Such a mess.

On top of all this, it’s an open world, mission-based game too! That usually mean lots of little side quests to fill out the map and encourage exploration. Over and over your side quests are an ambush battle, a gun turret battle, a mortar strike battle and a race. Of the game types, only the racing is fun (especially the segments where you are shooting enemies while driving). Otherwise it all felt like an excuse to look at pretty art and listen to crappy metal music that holds no nostalgic value to me. I hope Broken Age does well, because Doublefine needs to concentrate more on pure story driven games and less on standard console action game tropes with an artsy paint job.