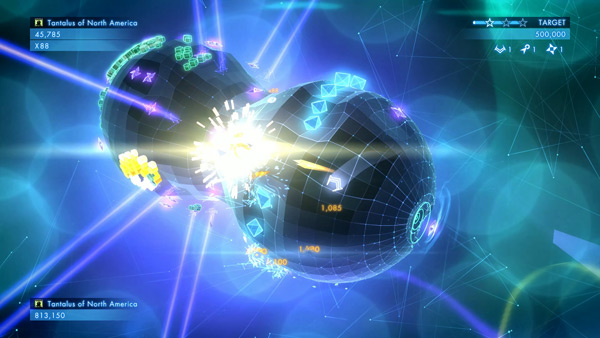 The original Geometry Wars was one of the purest, most exhilarating gaming experiences of the post-arcade era. It combined the visuals of Tempest with the frantic, twin-stick shooting of Robotron 2084 to form a thoroughly modern point-driven shooter. The Wii exclusive sequel Galaxies added level variety and the great risk/reward mechanic of collecting geoms to increase your point multiplier. It’s still the game that I play the most on my Wii.

The third game in the series builds on the Galaxies formula but with the mind-blowing twist of moving the game grid onto curving non-euclidean surfaces. The result is nothing short of spectacular. You are still technically moving in two dimensions but now you need to navigate around spheres, cylinders and other irregular solids. These new non-euclidean mechanics don’t seem like they would work, but controlling your ship feels completely natural. As the grid begins to fill with hundreds of enemies, if you are having a good run, you start to feel like Rainman as you rack up the points. Like the other Geometry Wars installments the screen starts to look like an insane iTunes music visualizer that somehow you are able to navigate. Highly recommended.