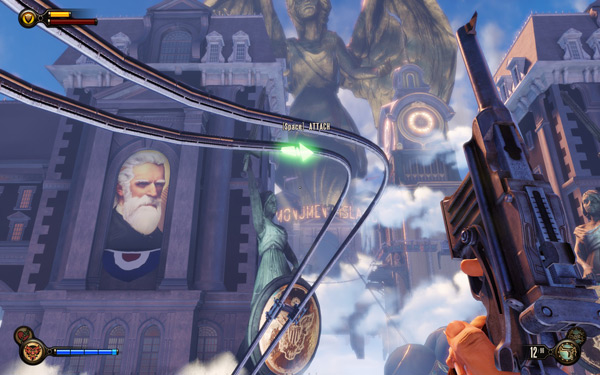 Infinite is a worthy successor to the original BioShock. It’s not so much a sequel as it is a re-theming of the game with a new story, new environment but much of the same game play. The cloud city of Columbia is simply beautiful and filled with visual and sonic detail. There’s something to look at around every corner.

Once the killing starts the game really begins to shine. You are still shooting with your left button and casting magic powers with your right but in much more open, vertical spaces. Battles flow nicely and are never too unfair (I finished the game on hard difficulty) and the new system of sky-rails adds another wild element to the action. My only gripe with the game mechanics is the return of the “vita-chamber” life restore system. I hate, hate, HATE this system. I would rather just have check points and if you die, you die. The revival system just doesn’t make death seem that consequential.

The main draw of the BioShock games is their stories. Infinite does a could job of building up the characters and the mystery up until about two-thirds the way through when a dimensional-travel plot device comes into play. Things just get confusing and you stop care about what happens since you know if a dimensional hole might open up and just fix everything. They try to tie it up with a bit of a twist ending, but it doesn’t really make sense like the twist in the original BioShock. There’s no thinking back to earlier parts of the game thinking, “Oh, yeah. That’s what that was all about.” That said, I immediately started a new game the moment I finished the first one.