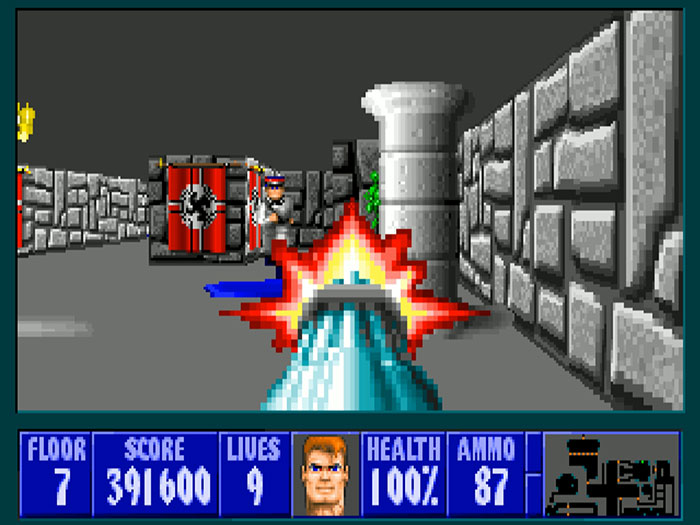 As with most of the great shareware titles of the 90s, I played the free episode of Wolfenstein 3D a gazillion times but never bothered to buy the complete package. Once again with thanks to GOG.com I have been able to finally complete in its entirety. This is the progenitor of first-person shooters and the basic game mechanics are still pretty solid. Its main problem is that of repetitiveness. There are only four kinds of enemies to fight. That isn’t including the bosses at the end of every episode which all have a unique sprite and some even have an elaborate death sequence:

But even those bosses all kinda fight in the same manner.

Levels are built on a grid of right angles so that most can be navigated by simply always going to the right. There are no realistic shadows or lighting. The overall effect is that of being in a sterile, strip-mall dentist’s office. Playing this again really made me appreciate the giant step forward that Doom was. Despite these complaints, blasting away Nazi’s is still fun.

As you can probably see in my screen grabs, I was using a mod that gave me a minimap and also, more importantly, mapped the controls to the modern WASD layout. The map does break the game a little in that it eliminates the need to hunting for secrets. Having to push every wall randomly was never really a great design choice anyways.