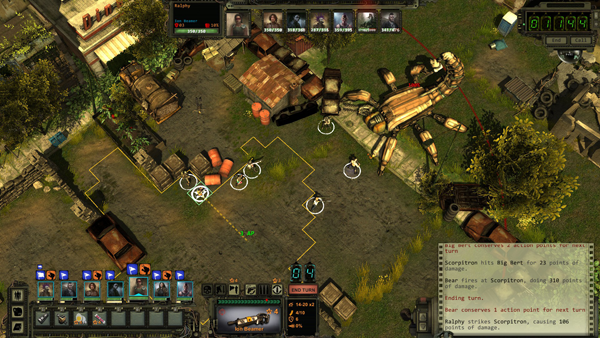 Soon after I plunked down a few Kickstarter bucks for Broken Age, Wasteland 2’s campaign popped up. Back in my Apple ][ days I knew about, but never played, Wasteland. If I was going to commit time and effort to an RPG, it was going to be Ultima. However, after my migration to Windows, the game’s “spiritual successor” Fallout was one of the first big games I played (it was also the first thing I ever bought on eBay back in 1998. The box smelled like cigars). I really liked the more recent Fallout 3 / New Vegas games, but, like many old-timers, I longed for the deep, turn based combat of the first two games of the series. Brian Fargo’s Kickstarter video promised to bring party-based, turn-based, post-nuclear-based gaming back… to base. To have. I was sold.

And now, unlike some other well-known Kickstarter projects that I perhaps mentioned a paragraph ago, Wasteland 2 has arrived on schedule! And, whaddya know, it delivered on all of its crowd-sourcing promises. The game-plays and feels very similar to the first two Fallout games, but it uses a 3-D engine with fluid animation and camera control. This is still an indie-game, so the game engine and art assets lack the polish of a triple-A title. There’s quite a bit of slow-down during explosions and the occasional weird rendering bug (every once and a while I would lose camera control in combat and would see a glitch where I was panning shadows around instead of changing the view). But these bugs where rare enough not to be a huge problem.

There are two things that really shine here. First, I forgot just how fun and satisfying tactical turn-based combat is. The meditative pacing and planning makes getting that one big kill just at the right moment feel like a real accomplishment. Second, the game is filled with ambiguous moral choices that helped really get me invested in the characters and story. Whereas a game like Mass Effect has very obvious good guy bad guy dialog options, Wasteland 2’s choices will have you allowing one evil faction prosper by eliminating their just-as-bad rivals in order to save a third group that will help you on your main mission. No one gets everything they want and that makes for a unique experience for anyone who plays the game.

Your choices matter. In fact, I was able to get the game to an unwinnable state because I hadn’t bothered to have more than one character develop a certain skill. I’m not very good a character management in RPGs. Fortunately, I only had to go back one save state, before a final level-up, to avoid this problem. I can see a lot of younger gamers hating this sort of outcome, but for me, it just raises the stakes.

All-in-all, despite it’s rough edges, Wasteland 2 was worth the wait and is a worthy successor to both the original Apple ][ version and the subsequent Fallout games.