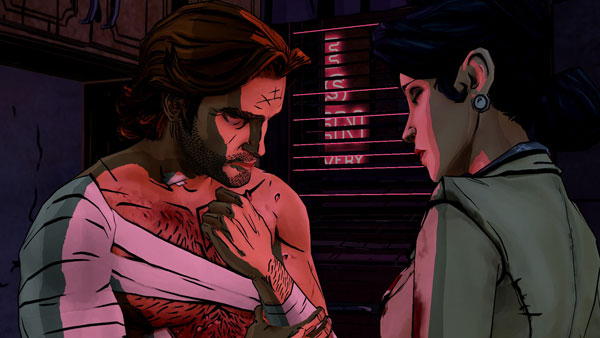 After The Walking Dead (especially season two… which I apparently forgot to review. Well, it was great.), I was pretty much sold on the Telltale choose-your-own-adventure game formula. These games are really like watching a TV show in which you’re forced to pay close attention to what’s going on and have a say in how the characters interact with eachother. So far, the stories and characters have been engaging and satisfying.

I began The Wolf Among Us without knowing anything about the comic series on which it is based. As far as I knew it was the story of a werewolf living in the big city. It’s not. The conceit here is that all the characters are from fairy tales and myths and are trying to get by along side the humans in New York. Wolf is actually The Big Bad Wolf of Little Red Riding Hood and The Three Little Pigs fame, now a film noir style PI investigating a series of murders. Sounds completely ridiculous, but somehow it all works and I loved every second of it. If I had any criticism, it’s that the choices were not nearly as gut-wrenching as they were in The Walking Dead, but, that aside, it’s an excellent interactive experience (not really a “game” per se).