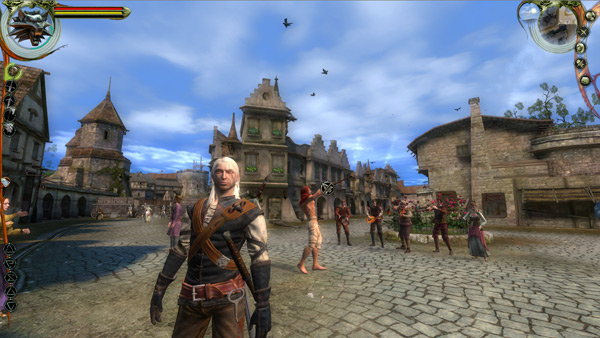 The Witcher is a flawed but ultimately satisfying role playing game that puts you in the role of monster killing mutant named Geralt. In some aspects the game is a bit more hardcore than other recent RPGs. You need to pay close attention to dialogue as clues are not spoon-fed to you and the almighty quest arrow is somewhat deceiving. The first half of the game feels more like an adventure game in which you are talking to NPCs and running back-and-forth across the map to advance. I eventually got the hang of the way quests worked and was able enjoy the game much more about one-third the way through.

While story and questing are complicated, fighting and building your character have been simplified. Combat involved a timing-based system of clicks and weapon swapping. You only have two real weapon choices and five magic spells. While others may scoff at this simple system, I rather enjoyed it. It’s not the mindless clicking of Diablo and not the thinky strategic multi-character battles of a Baldur’s Gate style game. Relaxed but engaging.

The big story arc is a basic one in which you are to recover a stolen goods, but, along the way, you get entangled in politics, romance and lending the occasional helping hand. The side quests eventually tie in nicely with the main story, although I never quite felt like the main baddies were that much of a menace. Oh, and as for the “romance” aspect, that consists of bedding anything with a pair of polygonal boobs in exchange for a racy trading card. Classy stuff.