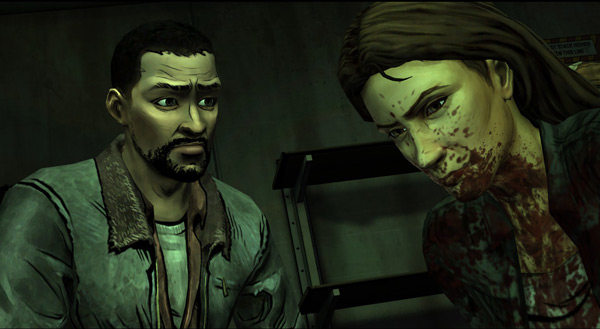 Over the past few years I have had a love/hate relationship with The Walking Dead T.V. show. Unlike most of the trash in the zombie sub-genre being released these days, the pilot episode was simply one of the best zombie stories ever filmed. However, as the series progressed, it has sunk in quality where at times it just feels like a bad soap opera filled with characters who make the most unrealistic and stupid decisions. The fact that there is a zombie apocalypse going on has little or no bearing on the plot most of the time (you can just replace “zombies” with “earthquake” or another major disaster and you would have the same show).

The video game adaptation is different because now you can make the stupid decisions! Rather than a standard point and click adventure, Telltale has created a system that is essentially a Choose Your Own Adventure audio/visual experience’like Dragon’s Lair except your choices actually effect how the story progresses. Most of these choices occur in dialogue interactions as a timer ticks down waiting for you to pick your line. Choose to be a rational human being or a dick, it’s all up to you.

If I may go on a bit of a tangent here, I’ve noticed that most end of the world stories assume people would all just become horrible to each other and betray their fellow survivors just to gain a modest advantage. I really doubt this is how things would unfold. I think 99.9% percent of people are good and humans would be resourceful enough to team up and rebuild. My anecdotal experience with neighbors helping each other with snow shoveling this morning is what I am going on, so that that with whatever grain of salt you want.

Anyhow, back to the game: There are points where your choice is between rescuing character A or character B and those are the moments that supposedly can really change the story. I went back and replayed the first episode picking different options and the changes aren’t that huge. The key plot points remain the same. In theory, this should make for an awful game, but The Walking Dead is saved by its engaging story which avoids most of the melodrama of the television show. Because I was the one making the crucial choices, I was even more invested in the characters than I could ever be if I was passively watching the show. Maybe not a great “game” per se, but definitely a great piece interactive fiction.