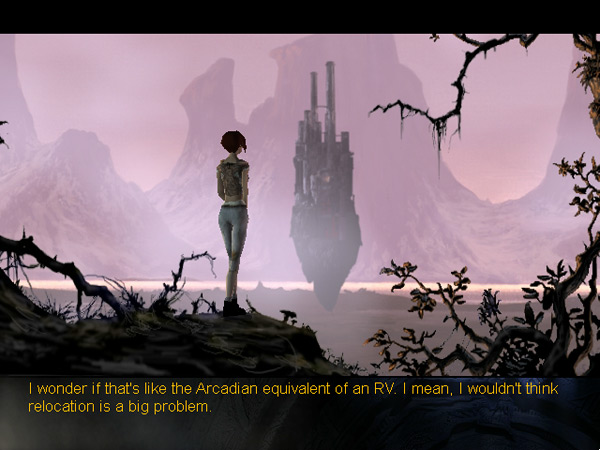 Fresh off of completing Broken Sword, I decided to continue my point-and-click adventure gaming with The Longest Journey. Like Nico from Broken Sword, April Ryan of TLJ has one of those early nineties reverse mullet hairdos, short in back and long in front, but that’s about where the similarities between these two games ends. TLJ is far more epic in scope with your standard video game “you must save the world from certain doom” plot. The game is massive, but it is broken up into smaller digestible chapters that could generally be completed in one sitting. Early on in the game I got stuck a few times and had to turn to the ‘net for hints, but once I got a feel for the type of puzzles to expect I was able to get through most of the puzzles on my own. The biggest help came when I realized that by hitting the ‘A’ and ‘S’ keys, I could cycle through my inventory without having to navigate through menus and icons. There were still a few times when trial and error were all I had to go on. In hindsight, I’ve really come to appreciate the subtle built in hinting system in Telltale Games’ titles like Sam & Max.

During game play, April and the other on-screen characters are low-polygon 3-D models set against pre-rendered backdrops. They must have only slightly upped the poly-count for the cut scene animation because April still looks and moves like a textured balloon animal. Grim Fandango predates this game by a year or two, but, because of its character stylization, looks leaps and bounds better.

Graphical shortcomings aside, The Longest Journey managed to engage me the whole time with its fantastical story telling and likable characters. I didn’t quite understand the need to insert F-bombs and other adult language into what should have been a safe PG-rated game. I thought it didn’t quite fit in with the dragons and whimsical tree people, but I guess that supposedly makes the game more serious and mature?