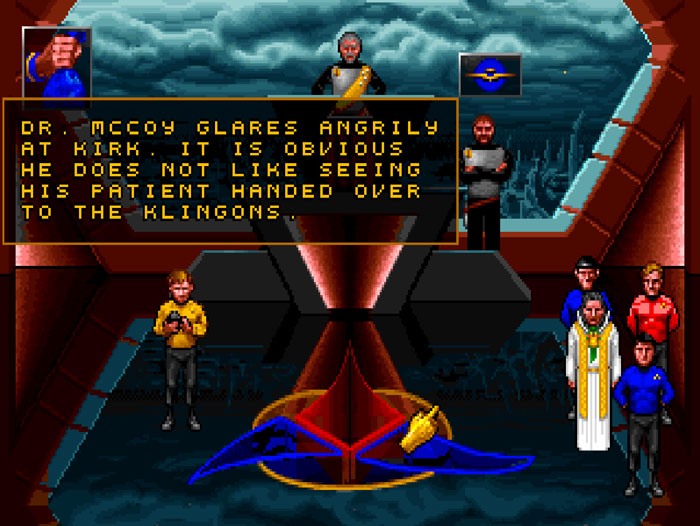 I remember watching my housemate play this game quite a bit back when we were in college. I don’t think he had the CD-ROM version’which included voice acting from the original cast. Luckily this GOG.com version has all the recorded elements (and none of the weird DOS set up problems). Yup, there’s nothing like hearing an aged, breathy-voiced DeForest Kelley read mediocre video game dialogue!

The past few months I have been in a Star Trek state of mind as I have been streaming episodes of The Next Generation. This game really seems to capture the essence of the shows. This is despite the opening space battle which, to me, really doesn’t feel very Trekish. Space combat pops up a few more times, but, for the most part, the game is about beaming down to worlds, exploring and solving problems. It’s broken up into nice short episodes, each with their own flavor and challenges.

As for the adventure gaming, it is pretty good but there are a couple annoying moments about halfway through the game. The Harry Mudd episode is funny but lacks purpose. The “Feathered Serpent” episode has a couple of puzzles that rely on you having taken notes early on and having a knowledge of base-3 numbers. And the final episode has a game stopping bug that will leave you wandering around with nothing to do until you are finally killed when time runs out. I can’t imagine how infuriating this game was before the age of internet walk-throughs and hints.

Just like the original show, the plots leave nothing for Sulu, Chekov, Mr. Scott or Uhura to do but sit on the bridge and mope around. It was also severely lacking in Kirk mountain-punching. Seriously, what’s TOS without some Ponfarr ritual battles?