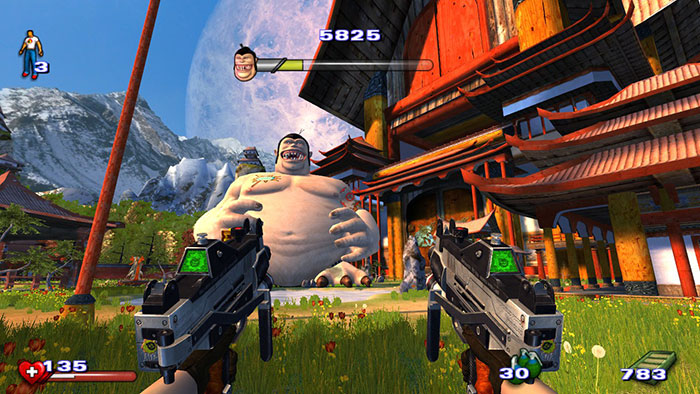 The original Serious Sam became an unexpected hit when it received the approval of Old Man Murray. While other games were trying to be dark and mature, Serious Sam reveled in pure, goofy run-and-gun action. It was like Duke Nukem if it was made by a backwoods folk artist. This sequel is somewhat of a technological upgrade, but the art design still looks like the work of someone just learning how to use 3-D Studio Max, and that is the game’s charm. The enemies range from run-of-the-mill space marines to exploding clowns to giant cigar smoking mechanical T-rexes.

It takes a while for the game-play to rise to the bonkers level of the first one, but by the final world you will be shooting and running backwards from hundreds and hundreds of (literally) screaming mobs. The shooting mechanics are lacking the visceral feel of the Shadow Warrior reboot, but what it lacks in feel, it makes up for in the sheer numbers of enemies.

Perhaps the most surprising thing about Serious Sam 2 is that its cut scenes can be genuinely funny. The story is dumb and the writers know it. So, rather than bore the player with exposition, you can watch Sam rise a surfboard in the sky or get drunk and party with the local primitives.