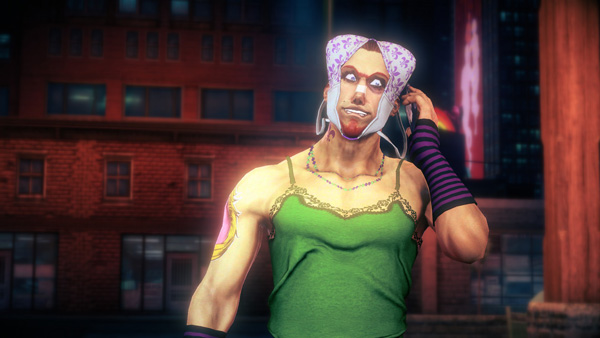 Saints Row IV is an obvious rip-off of Grand Theft Auto all the way down from the open-world mechanics to the gangster themed plot. In realizing this, the makers of Saints Row opted to differentiate themselves by completely disregarding the gritty realism of GTA for an insane sci-fi fantasy plot twist in IV. Aliens have destroyed Earth and the last remaining humans are the Saints gang leaders, all of whom are trapped in a Matrix-style virtual world. The game never takes itself seriously and is filled with amusing quips and plot moments. As the game progresses you begin to overcome the simulation, causing it to glitch and pixelate and giving you unstoppable super powers.

The plot is really stupid and revolves mostly around reviving your friends, none of whom I knew anything about since this was the first Saints Row game I ever played. I guess fan of the previous games may get a kick out of each of these characters, but I really couldn’t care less. The plot and characters are just a necessary background to what is really the fun of this game: open-world mayhem and ridiculous player customization. I spent half the game with a bra on my head and my character talking like a duck.

Like any open-world game this hinges on the variety of missions and activities. Saints Row IV does okay with this for the first half of the game, but once you start to gain powers most of the tasks become trivial and you can just explode everything. That said, I did manage to waste a bunch of time on collectibles and side missions so it must not have been as repetitive as I am remembering it. I would love to see one of these open world games to make the world persistent so that your path of destruction would scar the land forever.