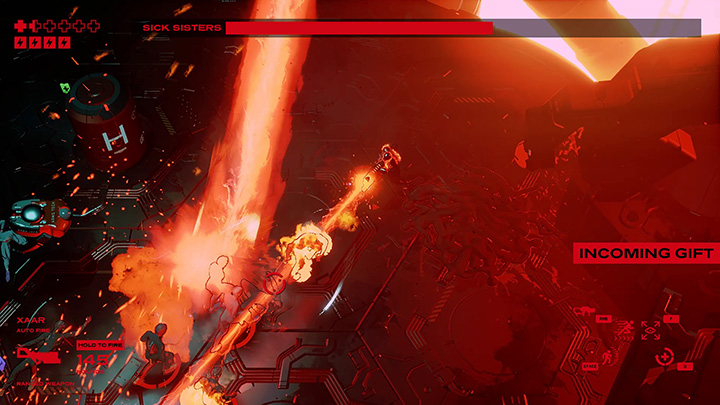 Ruiner rages with a riot of red. So much red. It’s like an entire game based on a Photoshop filter applied to the R channel. I went in to this thinking it was going to be your standard twin-stick shooter like Nex Mechina and I was excited. No, this is one of those aim with the mouse, steer with wasd games. That control scheme always seems a little bit off and, when you’re in an isometric view, the aim never quite matches with your perspective. On top of this there are several special moves bound to other buttons. The most important of which is a chainable dash move. This is very awkward when you need to use you mouse both for aiming and positioning your dashes.

About two levels in to the game I was getting flashbacks to Until I Have You, which has similar cyberpunk aesthetics, but also has a game ruining control scheme. I gave that game a bad review on Steam describing it as being like controlling a game with a theremin. The developer then contacted me wanting me to elaborate. Awkward. That’s just about as weird as when Sweetwater Music calls you in regards to your online purchase of strings and a few guitar picks. There’s customer service and then there’s just leave me alone so I can never leave my desk and buy things on the Internet and rant anonymously in the middle of the night.

By that third level Ruiner had become so frustratingly hard that I was considering giving up. Then, in a moment of inspiration, I realized, “Hey, there’s an easy mode!” Upon switching down the challenge the game actually became fun. The whole point of the story is that your some cyber-modified human with unstoppable kill-powers. When you die every few minutes, you lose a bit of that key plot point. With the tempo is slowed down, I was able to wrap my reflexes around the janky controls and actually start to feel like I wasn’t just clicking randomly. Maybe the game could have used a more gradual difficulty curve to make normal mode actually playable to an old geezer like me. I recommend it. It’s short, über stylish, and spazzy fun.