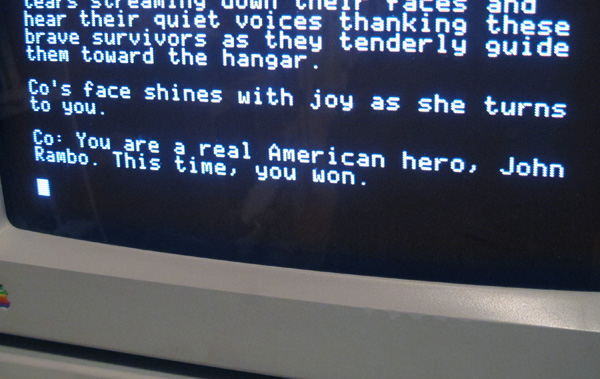 This is another game, like Dream Zone, that I owned for years (decades actually) and was never able to finish. Now, thanks to the Internet and instant walk-through availability, I finally was able to continue past the point where I was stuck nearly twenty years ago. I had originally bought this game thinking I was in for some intense, four-color, commie-killing run-and-gun action on my Apple ][+. Imagine my disappointment when I got home, popped in the disk, and discovered that this was the text adventure adaptation of the film. Having bought this game at a B. Dalton’s book store in the mall, I should have known better.

Although I am terrible at these games, I have since come to appreciate the interactive fiction genre much more. Rambo has some well written and very atmospheric room descriptions. You really get a feel for the jungle environments. However, the game itself is not that great. It suffers from the text equivalent of a problem with many modern games: great graphics and uninspired game-play. There are simply way too many “guess the verb” moments. For example, there is a fight near the end of the game where the correct response is to “flip” your opponent, then “kick” and finally “trip” him. There are no cues telling you this is how you should attack him. You are just supposed to know this. “Punch” or “hit” don’t work. The worst offense is an interrogation scene were you are reminded that you are never to co-operate with the enemy. As the torturers ramp up the pain you are only supposed to type, “Say my name is Lone Wolf.” You have to say that specific phrase otherwise you will die. No where in the manual or game preamble is this hinted. Again, you are just supposed to know it (or was it in the movie? I can’t remember).

The game is relatively short with a time limit that effects the final win condition if you are not fast enough. I think I needed hints for about forty percent of the game, but I’m just glad I finally made it through. Now I can take down my POW-MIA flag that has been hanging over my Imagewriter for all these years.