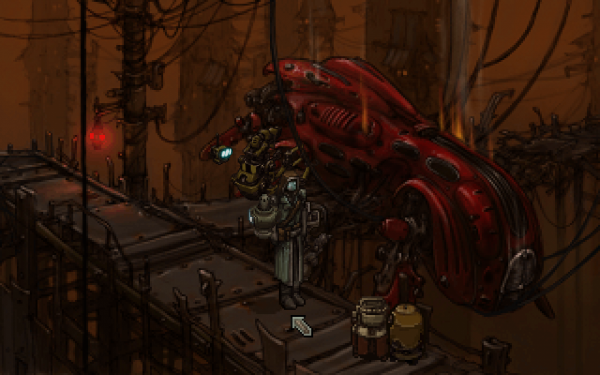 Primordia is an absolutely beautiful point and click adventure from Wadjet Eye Games. Besides the graphics, it has a lot going for it: a unique sci-fi setting, fun and interesting characters, great ambient music and a some nice voice acting performances.

The story is essentially an object quest that slowly reveals the back story of the world and the main character. This one is a bit more puzzle-centric than other Wadjet games I have played. That’s mostly a good thing, but there are a few moments that didn’t seem fair. Not that there was a lack of clues, but on a couple of occasions I had to revisit areas that where already explored and had deemed finished only to find out the *now* I could click that piece of scenery.

There are multiple endings and I think I got the “B+” ending. Fortunately, I had a save and could go back and see the “good” ending later. I am not terribly interested in ever replaying even 10/10 adventures despite the multiple ending gimmick (although I have gone back to all these games to listen to the commentary track).