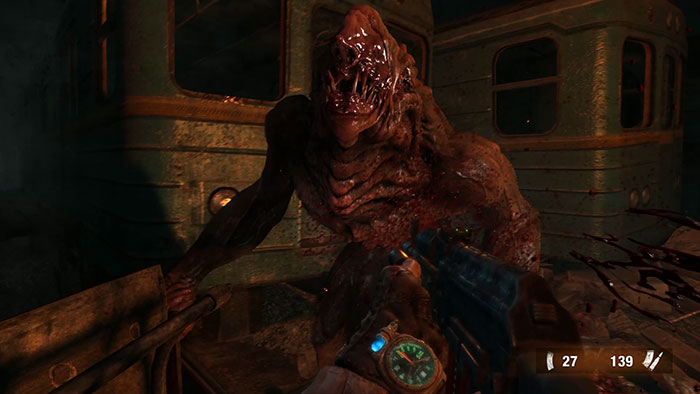 There was some sort of nuclear apocalypse and the citizens of Moscow were forced to live in the city’s subway tunnels. Of course the world is now filled with irradiated monsters. Yet, the humans are still fighting wars with other humans in the tunnels because sci-fi writers can’t comprehend that people might actually co-operate in dire circumstances. For some reason you are tasked with saving your station from impending doom and thus begins you journey down the rails to find help. Your job will be difficult, not because of tough choices and insurmountable odds, rather because everything is brown and hard to see in the dark. Oh, and you need to keep changing you gas mask filters every three minutes.

Metro 2033 is very strongly mediocre as far as first-person shooters go. You are literally on rails for a good portion of the game so exploration is not really an option. There seemed to be only two or three monster types the entire game and they all seemed unaffected by your shots until they aren’t. The guns never felt like they had any power behind them. The best parts of the game are when you need to use a little stealth to get through a region but those were few and far between. I didn’t realize you could recharge your flashlight until about two-thirds the way through the game and, pro-tip: running through the dark sucks.