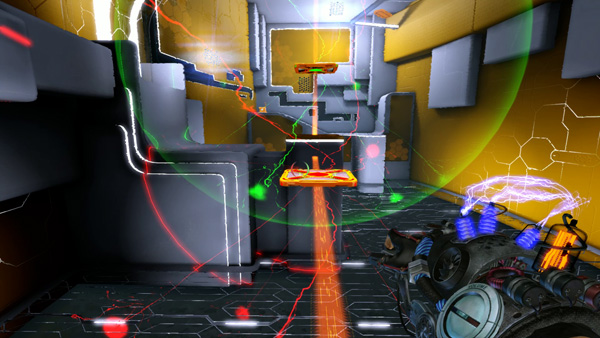 This was a freebie from GOG.com that I went into knowing nothing about it. The first thing anyone who plays the game will think when they begin is, “Wow, this is a complete Portal rip-off.” Then you get about halfway through an you’ll think, “Wow, this really is a complete Portal rip-off!” Now, Portal was a near-perfect game, so if you are going to rip a game off you might as well steal from the best, but they could have at least tried to change a few more of the story points. You start off as a test subject in a puzzle-filled lab armed only with a fancy future gun that shoots two colored beams. You slowly discover that things aren’t quite what they seem as the test facility falls into ruin and, eventually (and here’s where things get a little different), you battle Cthulhu and the old gods of H.P. Lovecraft. That last bit wasn’t a joke (oh, I should have said, “spoiler alert”) and it’s just as stupid as it sounds.

Now, the core mechanics of the game are unique. You are not creating teleportation holes. Instead your gun magnetizes various items in the rooms with either green or red polarity. Through this you manipulate the environment using the magnetic fields to push, pull and launch your way through puzzles. It lacks the kinetic energy of Portal but offers pretty tough challenges near the end of the game. However, I felt like it went on a bit too long and was bored by the puzzles and the story by the end.