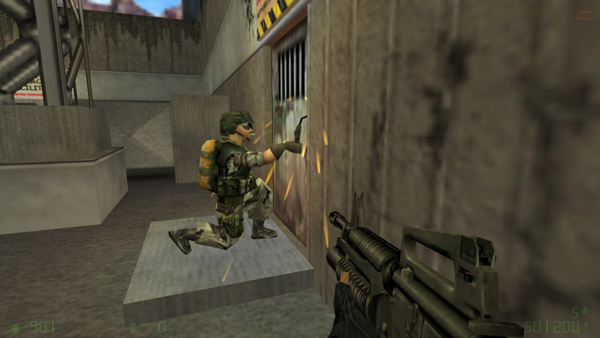 Opposing Force is a welcome improvement over Blue Shift. First off, it’s feels like a full game rather than just a bunch of new levels. It’s nowhere near as developed as a modern shooter, but there’s a little bit of a story to follow. Half Life was much lauded for its story, but, in hindsight, there really wasn’t much there. Opposing Force doesn’t even have that minimal level of depth, but there’s enough there to push you towards your goal which, as always, is to get the hell out of Black Mesa.

There are also a couple of new mechanics… literally… you can recruit a mechanic to open a sealed door for you. There are also medics to heal you. Both will help you out in a fire fight (if they are not blocking your path) and both constantly spout lines from Aliens. I can’t say if any of the creatures or guns were new, but the ability to swing and climb ropes was added. Doesn’t really get used all that much, but it’s something.