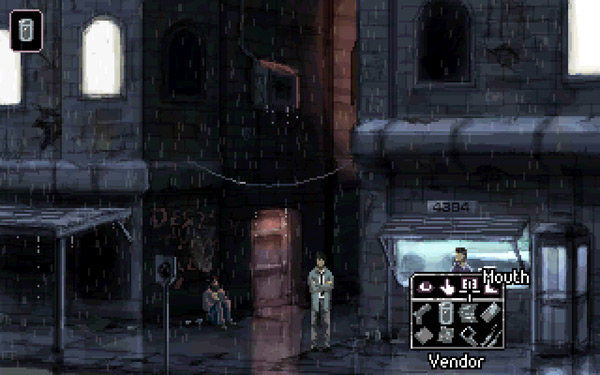 Gemini Rue is another enjoyable point-and-click adventure from Wadjet Eye that has a sci-fi noir theme. Having gotten used to the click for any action mechanism of other Wadjet games, I was a little thrown off by the strange “actions” pop-up interface. You click on a hot-spot and then have to chose whether to use your eyes, hands, mouth or foot. I eventually got used to it, but the few times I was stuck in the game, it was because I forgot I had a “foot” action that I could use.

The story is split between Azriel (your typical noir anti-hero on a quest to find his brother) and Delta-6 (a captive in a prison colony where memories can be erased and the prisoners are being trained for some unknown purpose). Both halves of the story are interesting and much of the motivation to continue on is in finding out how these two worlds connect. The big twist is not terribly hard to predict, but I still was satisfied by the ending.

My only complaints about the game are with its somewhat tedious room-traversal in the name of solving some relatively simple puzzles. There is also a shooting mini-game mechanic throughout the game that is okay, but doesn’t really add much. Other than those points, the game is worth trying out. The graphics are nice and pixelated and the music is excellent (buying it on GOG.com includes the soundtrack).