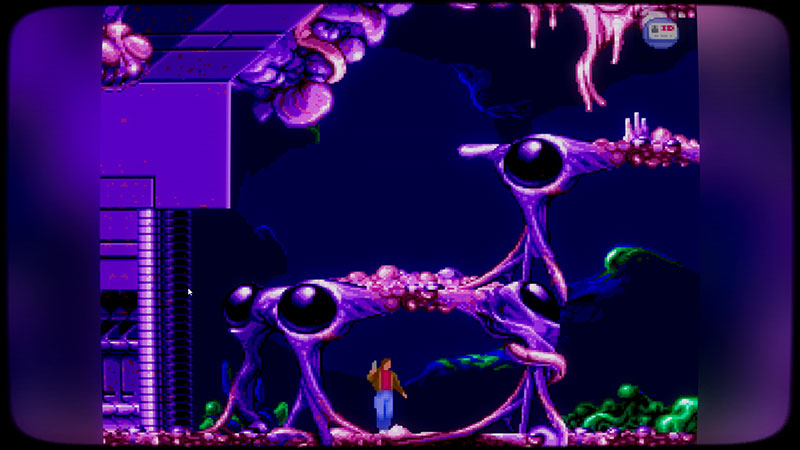 I must have attempted to play this game about a dozen times. I would download it from some abandonware site, fire up DosBox, and then proceed to be frustrated out of my mind by the sluggish controls and unfair level design. Or maybe I was just terrible at that first jungle level.

Well, this is the 25th anniversary remastered edition. It’s more or less the original game emulated, but there are a few quality of life improvements. First and foremost is the ability to rewind the game after you die for an immediate do-over. Second, there are on-screen help boxes to guide you through the cryptic control scheme. There are also a bonus “street art” pickups on the levels (which are a complete waste of time) and the ability to switch to that goddawful “SuperHQ” graphics mode where the pixels are all smoothed out. Does anybody think that mode looks good? It just negates any pixel art charm.

A lot of the game is still frustrating as hell, but at least I didn’t have to reload after each of my million deaths. As beautiful as the Prince of Persia-esque rotoscope animations are, they are what make controlling your character such a pain. You are surrounded by monsters and you have to wait for what seems like an eternity for the gun-draw animation to finish. By the time it’s done you are already mashing the keys and inadvertently hitting the sheathe weapon key.

Eventually I was able to get used to the controls (somewhat) and just appreciate the artistry of the visual design. This game was touted as the follow-up to Out of this World and it has a similar feel. But it’s a much more of a standard platform game in the mold of the previously mentioned Prince of Persia. The story is told through its wonderful vector art cutscenes and less through your direct actions. There are a few inventory puzzles to solve, and an early section which starts to feel like a quest driven RPG. More of that would have been nice, but as a platformer it holds up pretty well.