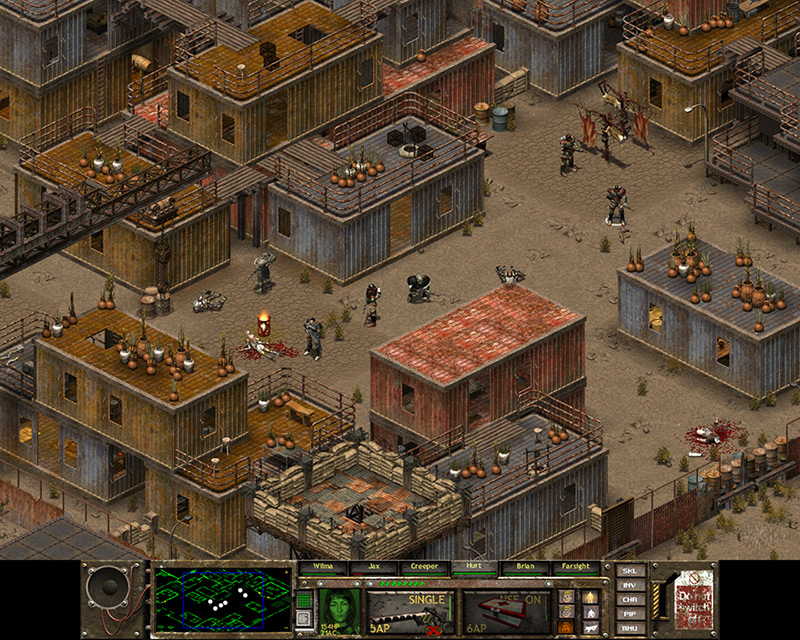 The third game in the Fallout series eschews much of its RPGness and concentrates on combat instead. I always liked the turn-based fights in the first two Fallout games, but there’s something off about the way the system was implemented here. I was having the hardest time getting through the early levels and eventually gave up at one point. I finally came back to the game after having read that the way to play is to ignore the turn-based system and instead use the real-time mode instead.

Apparently, the designers all along intended this to be a real-time combat game and never really tested the other system. It shows. The real-time combat is much faster and more forgiving. Managing your party can get a bit overwhelming, but it pays to set up hot key groupings and moving your team around as two or three squads rather than six independent characters. For the most part, I enjoyed the game once I made this shift. The only thing missing was the pause and order mechanic that Infinity Engine games used. That would have come in very handy in many of the intense fights near the end of the game. in which I ended up having to switch back to turn-based mechanism to win.

Despite the narrower focus, Fallout Tactics is a pretty huge game. It took me around fifty hours to get through it. This is a lot more than even most modern RPGs allocate, and that’s also a lot of time to spend playing with little to no narrative payoff. There is a story which slowly develops from mission to mission, but it lacks the depth and character of a real Fallout game. I’m glad I played it, but now I am much more excited to dig into the tactical battles of the forthcoming Wasteland 3. The modern Wasteland games are more Fallout than Fallout Tactics.