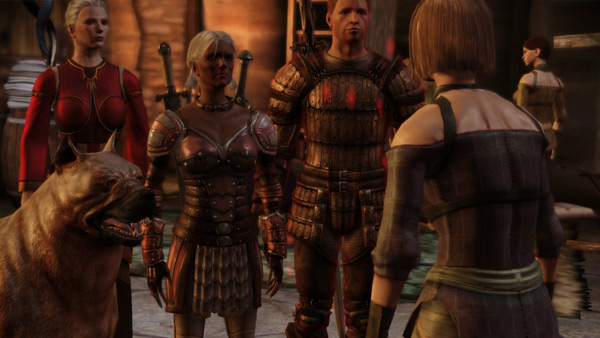 Man, this game was a bit of a mess. I guess I wanted it to be a Baldur’s Gate style tactical role playing game with all the characters and story of Bioware’s other big RPG, Mass Effect. Well, despite the zoomed-out tactical battle mode, this is not an Infinity-Engine style game. Most of the game is played in a stilted third-person view with super-wonky controls. You can zoom out, but you aren’t allowed to pan around the battlefield much. Eventually I got the hang of it, but I had to put the game aside for a while out of sheer frustration.

There was a large chunk in the middle where I appreciated the mindless hack-and-slash game-play. But I found myself just watching my health bars and timing healing while letting the computer control all the fighting. This gets old and it doesn’t help that you will occasionally hit a battle that is inexplicably a zillion times harder than the last hundred or so encounters. You’ll have to replay the same battle over and over again wishing you could save your game during the fight. While the rush of striking the final killing blow at the end of one of these endurance tests is satisfying, they just began to weigh down on me.

I spent the last third of the game on easy mode just so I could grind through the mediocre story. Demons threaten the lands. You must gather your forces. Blah, blah, blah, yawn. There is a hint of the character relationship building we got in Mass Effect but it doesn’t mesh with the game as a whole and just feels like the silly mini-game it really is. I had high hopes for this one (especially being on the heels of completing two stellar RPGs: Skyrim and Wasteland 2), but in the end it just felt like work.