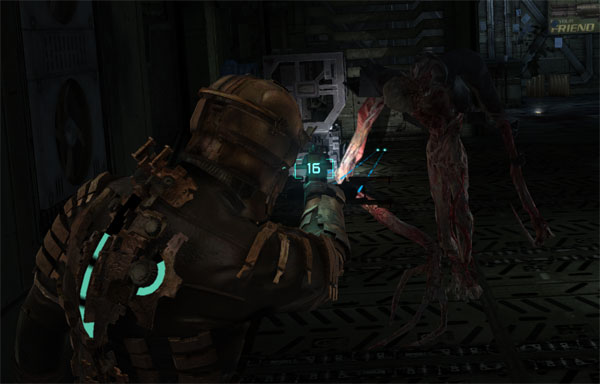 Aim for the arms! Aim for the arms, dammit! Ever since I installed my completely unnecessary 5.1 surround audio speakers to my PC, I have been looking for a game that would really take advantage of this set up. Dead Space has some really great sound design and what better way to have creepy sounds erupt behind you than with a dark, creepy horror game. Through the game I was, for lack of a better term, surrounded with the creaking, groaning and buzzing sounds of the spaceship Ichimura and would occasionally start at the sound of something scuttling behind me.

The gameplay itself is a bit repetitive. It alternates between pure point-and-click shooting and a handful of zero-gravity platforming environments. The latter was fresh and new, but the majority of the game is just picking off the limbs of necromorphs with your plasma cutter. That’s not a bad thing, but even Resident Evil 4 mixed things up a bit.

When I bought this on Steam (for a measly ten bucks) I was expecting a first-person shooter’an off-rails version of Dead Space: Extraction which I had enjoyed on the Wii. Alas, the game uses a clumsy third-person perspective with sluggish controls that take about a half dozen levels to get used to.

Thankfully, the story is pretty good and has a great ending cinematic that made me glad I finished the game. It is billed as a horror game and it has its fair share of creepy rooms and monsters, but I wasn’t really scared in the way I am currently being creeped out by F.E.A.R. This game relies more on jump scares with grating music cues just at the right moment. Oh and, spoiler alert: add this game to the long list of games that use an ally’s betrayal as a key plot twist at the end. Sigh.