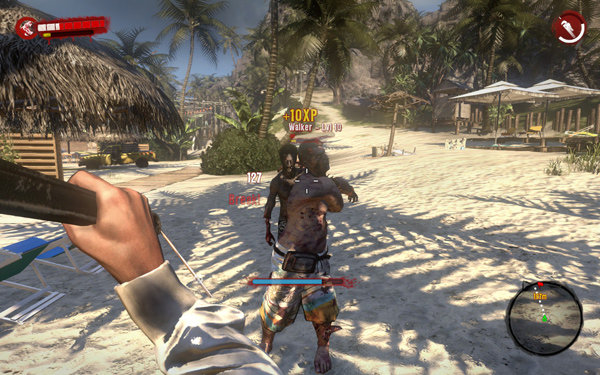 This game had one of the best trailers ever. None of the narrative spark that permeates the trailer is in the actual game. The closest thing you get is a few paragraphs of backstory on the character selection screen. This is unfortunate because Dead Island is a big open world game that gives you no incentive to explore it’s lush and detailed map. Rather than tell a story or develop characters, the quests are of the fetch and return an item variety. Even the opening cutscene is an insult. It consists of the worst “beeyotch”-laden rap song a 12-year-old wannabe gangsta could come up with.

The combat mechanics are fun and keep the game going for a while. But without the narrative hook, the chopping and bludgeoning just becomes tedious. The game doesn’t even let you play it as a pure action challenge because it uses a horrible recovery from death system that removes any real challenge in defeating particularly tough segments. Hit a thug, die, come back to life and hit him again… repeat until you win. Such a disappointment.