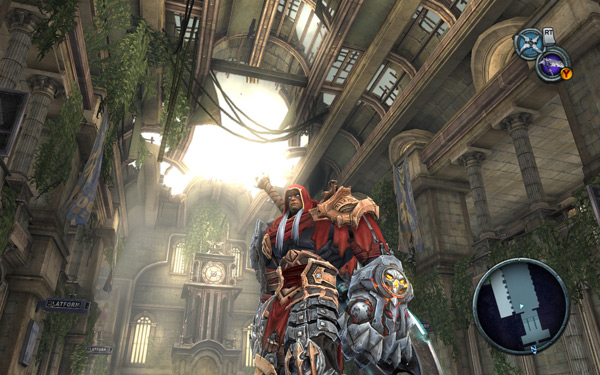 Darksiders is a game that is utterly derivative of Zelda. You are tasked with exploring various “castles,” each of which gives you a new power that will open up new areas on the map. Some of these new powers include Link’s hookshot, Eopna the horse (named Ruin here), a magic musical instrument, double jump, and the Portal gun is thrown in for good measure. However, unlike a Zelda, this game is supposed to be dark and edgy. It’s kinda like a modern superhero movie where they try to make a kids’ franchise dark and brooding. I can’t wait for the reimagining of The Wonder Twins.

You play War−one of the four horsemen of the apocalypse who snarls his way through the entire confusing story. As far as I could tell there’s a war between Heaven and Hell and the seven seals have been broken or some such nonsense. Honestly, I had no idea what was going on. The characters are stupid and undeveloped and the fictional world makes no sense. It seems like every dialogue sequence contains a line or two about, “you know this is the law!” followed by a meaningless battle in order to stay within regulatory boundaries of this unspecified law. Apparently, the world beyond is a boring government bureaucracy.

Story aside, the game isn’t that bad. How can you go wrong when you rip-off one of the best games of all time? The castle puzzles are pretty good, and the boss battles are satisfying. What this game lacks is the sense of exploration that you get with Zelda. There weren’t many moments when I was tantalized by some seemingly unattainable treasure that required a power I was yet to aquire.

One final complaint is that this was a super sloppy PC port. Controller support was crap. I had to download an xBox controller emulator to play the game. The game ships with a corrupt intro video that prevents the game from launching. The fix is to delete an AMD video in the install directory. Lastly, a recent Windows update broke the video in the cutscenes. Only the bottom half of the screen was visible. That required rolling back a Windows update which did all sorts of weird things to other programs. I own the sequel, so I hope they fixed those issues for that game.