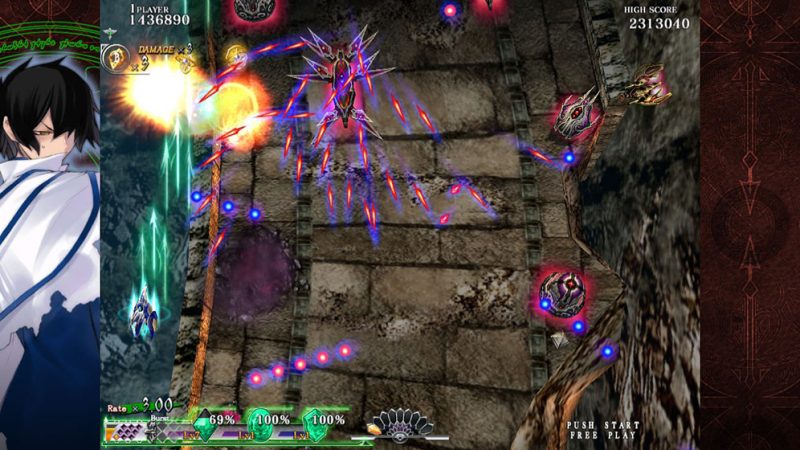 For some time now I have been interested in playing various SHMUPs in MAME. Some of the best looking pixel art exists in these titles and, even though I am terrible at them, I’ve spent hours on games like Gun Lock and Raiden. I was looking for a decent PC-based title and got this one off of Steam based on some of the reviews.

Unlike 90s classics of the genre, this one is full-on 3-D. As a result, it really doesn’t look anywhere near as nice as sprite-based shooters. Also unlike those 90s games, this one features character portraits which lose their clothes as they take on more damage. Japanese culture is really weird.

Idiotic aesthetics aside, the game plays pretty well. It is a bullet-hell game so it is beyond my middle-aged reflexes on any setting above easy but I can manage to hold my ground reasonably well on the first few levels. The main gimmick (besides the partial nudity) is that each ship has three special, upgradable shooting modes. The elemental shots will drain as you use them, taking time to refill, but they are the key to survival. The modes range from impenetrable homing missile attacks to a little golden palm tree they sprouts an inch away from your ship and doesn’t do hardly anything.

I have played a few more modern shooters since I got this, and, in hindsight, I think Caladrius is missing a little bit of the excitement of the top-teir SHMUPs. Yet I found it was a good entry point into the genre even if you are not a pervert.