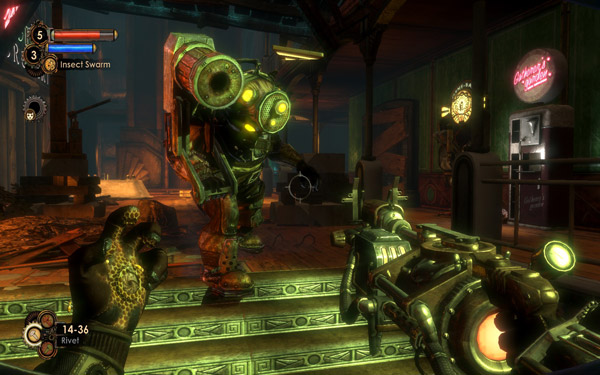 The original BioShock was a great game with an interesting plot and a wonderfully unique setting. I never really understood the bizarre take on Ayn Rand though. It seemed to say that if objectivism is taken to its logical extreme that would mean people who believe in individualism and self-ownership would immediately start modifying and enslaving people against their will? That makes no sense at all, but it was enough to give you a bad guy to pursue. BioShock 2 takes place in a more deteriorated Rapture several years after the fall of Andrew Ryan. This time, however, the collectivists are in charge and, whad-do-ya-know, they suck too. I guess the theme here is it’s cool to be an indecisive, on-the-fence moderate.

This sequel plays about the same as the original but there have been a few improvements such as the removal of those annoying pipe-dream style puzzles that represented hacking. The combat, while fun, was pretty difficult for me and I often felt like I was dying without warning. I eventually got the hang of it once I had enough power-ups. This game felt like it moved along a little better than the first with less back tracking. The story comes to a decent finale and, in the end, I think I liked this game just as much as I did the first one.